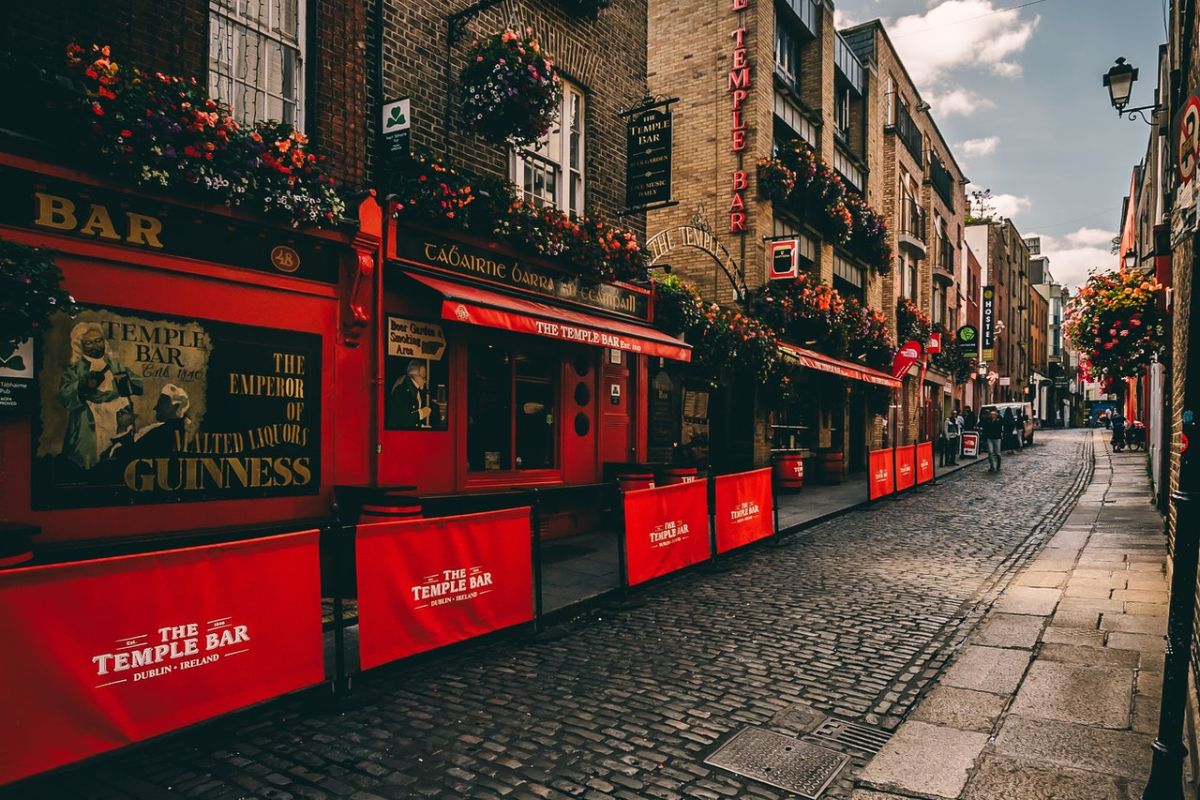 A DIFFERENT SAINT PADDY’S DAY MENU, FIT FOR A CROWD

The Irish get one day a year to highlight their cuisine here in America and undoubtedly, out comes the corned beef and cabbage.  I too, traditionally make it for the holiday.  But this year, I pulled out all the stops and went looking for some traditional Irish foods and recipes.  The research was as much fun as the experimenting, tasting and calls out to Irish friends for family recipes.  I had a blast preparing this post and learned a ton about some Irish foods (See my notes on the Barmbrack Bread).  Along the way, I even inspired an Irish Soda Bread bake-off!  (More about that later.)  I set my sights on a fun menu with some different twists throughout.  I pulled together a unique cocktail, an elegant appetizer and a big pot of stew for the crowd.  I served a couple of traditional Irish breads and whipped up a Bailey’s Irish Cream dessert.  So much fun!  But before we dive into the menu, I’ve got one very important thing to share.  For most of my adult life, I’ve always called St. Patrick’s Day ST. PATTY’S DAY.   It makes sense, right?  Patrick…Patty!!??  Well,  I just learned from Jamie Dornan (The Irishman starring in the movie Belfast.) that the correct abbreviation is ST. PADDY’S DAY.  Why you ask?  Because St. Patrick was known as Padre…hence, St. Paddy’s Day.  Who knew?   LOL  Now that we got that straight, let’s take a look at the menu.

Ireland has a lot of coast line and is well known for its fresh fish.  Salmon in particular.  Here in the states, we often have Alaskan Wild Salmon but in my research I found that Ireland is a big producer of Smoked Wild Salmon and after a little looking around, I settled on an import from Connemara Smokehouse.  https://www.smokehouse.ie/irish-smoked-salmon/

Their smoked salmon is absolutely wonderful.  I started this year’s menu using that smoked salmon with chive pancakes as my starter.  So elegant and it surprised a lot of people that this would be a starter in Ireland.  I served the salmon and pancake with a mini side salad to tie it all together.  If you don’t have the time or desire to get the imported, Irish salmon, please feel free to use domestic salmon. There are lots of fabulous smoked, wild salmon options coming out of Alaska.   I particularly like the chunky or flaky versions rather than the thin slices, but all work wonderfully in the recipe.

For my main course, I went with a Traditional Irish Lamb Stew.  Simple in preparation and absolutely a must for lamb lovers.  I love lamb anyway I can get it, so turning it into a rich, thick stew packed with onions, carrots and potatoes was a no-brainer for me.  My surprise ingredients?  Lamb demi-glace you can buy right online and the addition of pearl barley.  Wait until you taste this!

I always have Irish Soda bread on and around the holiday;  my mom just wouldn’t be happy otherwise.  But when I posted it to social media claiming it to be the best, I was flooded with recipes from friends saying, “No, theirs was the best.”  So began a week of making Irish soda bread…tasting, laughing, getting opinions and posting like crazy all the results.  It was just so much fun!  While it is very hard to say whose bread is the best, I can tell you I loved many of them and have added my new favorite to the recipe section on the site (The Lyons-Dooley version).  That version was more like cake and I wound up using left overs to make my dessert – two recipes for the price of one. See my two favorites on the menu below.  Try one or both of them and you decide.  I’d love to hear what you think.

However, while researching Irish soda bread, I came across a bread I had never heard of before and it came with such a great story and typical Irish superstitions.  The bread is Barmbrack and is yeast based and loaded with dried fruits like raisins, golden raisins, candied orange peel and candied cherries  It isn’t as dense as a fruit cake but it is delicious toasted and slathered in Irish butter and served with tea.  It makes a great breakfast or snack too.

The story of the bread is the best part and one that deserves being shared.  I’ve had a lot of Irish influence in my life from my Grandmother who insisted I take Irish step dancing lessons to my mom who sang Danny Boy every chance she got.  I have an awful lot of Irish friends – both American born and those from Ireland.  I’ve been to Ireland and spent an entire month getting the know the people and the food, yet this bread never came up until I started doing some food research. Then it popped up everywhere and I had to wonder how I missed it all these years?   Here is what I learned.

Barmbrack is actually part of an old Irish Halloween ritual.  (I didn’t even know the Irish celebrated Halloween.)  The loaves would be baked with various trinkets baked in the bread and was a kind of a fortune telling thing they did on the holiday.  The Halloween Brack (as it is often called) would be cut into and whoever got whatever trinket was inside their slice of bread would know their fortune for the coming year.

Traditional items (and their meanings) hidden in the Brack were:

.  A pea  (no marriage was insight for the year)

.  A stick (they would have an unhappy marriage or keep arguing)

.  A piece of cloth  (they would have bad luck or have a bad year financially)

.  A coin  (good fortune and they’d have a good year financially)

.  A religious medallion (they would become a nun or priest)

Barmbracks can be bought in Ireland around Halloween and today usually just contain a toy ring.  (Too afraid that someone would swallow all those trinkets!)  Reminds me of the King Cakes served for Mardi Gras in New Orleans where everyone is hoping for the little, plastic, baby Jesus to be in their slice of cake.  That would promise good luck for the coming year.  Or how about British Plum Pudding (also known as Christmas pudding) where a single silver coin is hidden in the pudding and is said to bring luck to the one that gets it in their slice.  Australia takes it a step further and adds several coins to the pudding…the idea is that they would spread the luck around.  This hiding “stuff” in cakes seems to be a global thing!  LOL

I also learned it was customary in different parts of Ireland to bake a barmbrack on New Years Eve.  As the sun went down, the man of the house would take three bites out of the cake and would throw them against the front door.  This was to ward off poverty for the coming year.  They would then eat the cake as a family.  This would be a good time to note, we didn’t do this in my half Irish house growing up.  Rather, we all had to have a piece of pickled herring at midnight for good luck.  Who comes up with these things?   LOL.  I thought it was a Lithuanian thing when I was a kid.  (Still haven’t tracked down it’s origin.)

But I digress.  Back to the St. Paddy’s Day menu.  I added the barmbrack so I could introduce what I’ve learned about the bread to my friends and family.  Let’s face it, that’s a fun story to share over a loaf of bread and Guinness while warning them to look for “stuff” in their slice!

While yes, my party had free flowing Guinness, I was hoping to find something unique in the way of a cocktail and I was not disappointed. I tracked down the Black Velvet Cocktail:  a mix of Guinness and Champagne.  Sounds interesting right off the bat, doesn’t it?  The drink did not let me down.  It is unique and no one I knew had tried it.  So, of course, it was on my menu this year.

I wanted something playful for dessert and creating a parfait using left over Lyons-Dooley Irish Soda Bread and Bailey’s Irish Cream. I served Baileys and Irish Coffee to finish the night and I think the dessert was the perfect ending to a great meal.  And there you have it…St. Paddy’s Day with lots of twists, great tastes and a little bit of superstition thrown in for fun.  If you are looking for the traditional “Corned Beef & Cabbage” St. Paddy’s Day menu, I’ve got you covered with my traditional menu here.  I should warn you upfront, they don’t eat Corned Beef & Cabbage in Ireland for St. Paddy’s Day…that is an American twist.   It doesn’t matter what you try, you’ll have lots of options. (If you are craving Fish & Chips, I’ve got that too.)  Put on some green and dig in!  Remember, everyone is Irish on St. Patrick’s Day. 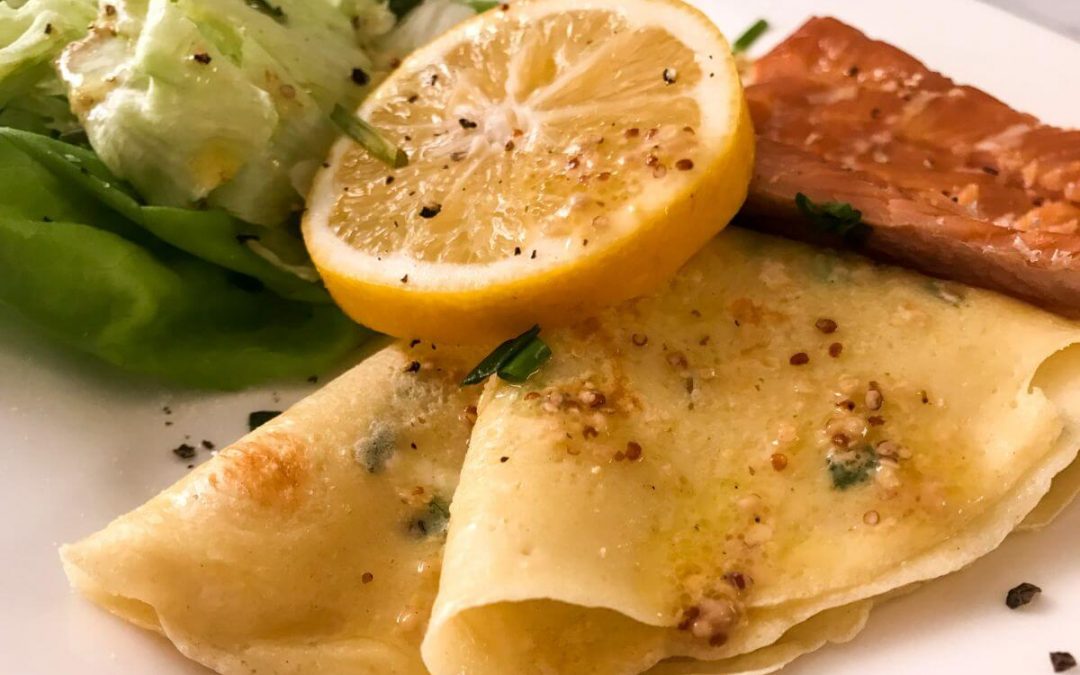 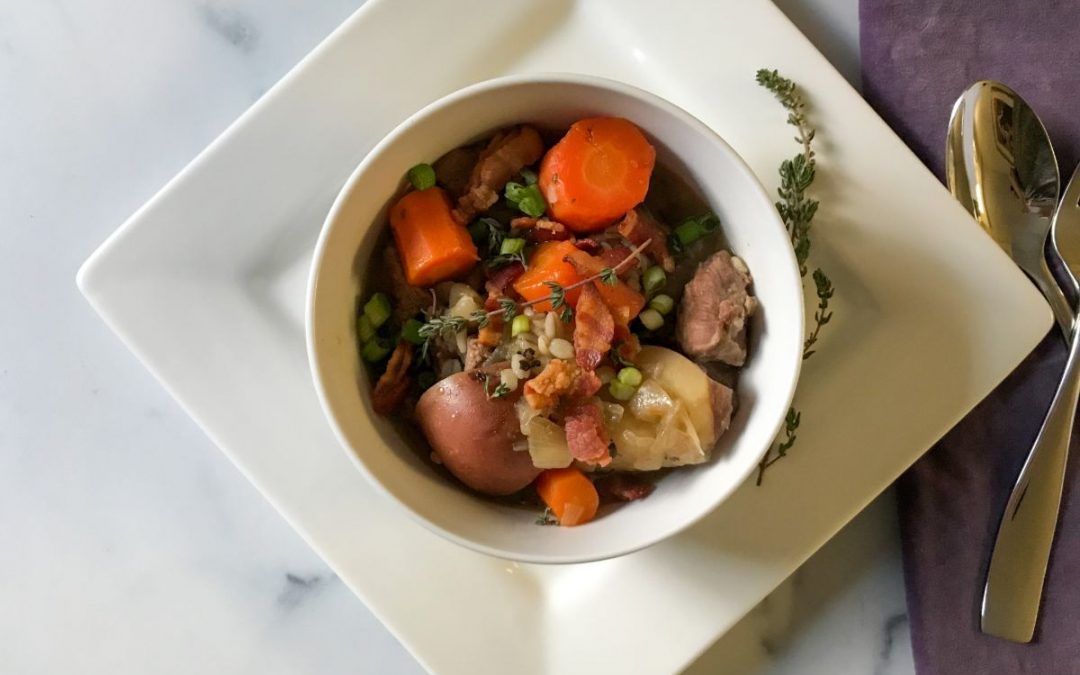 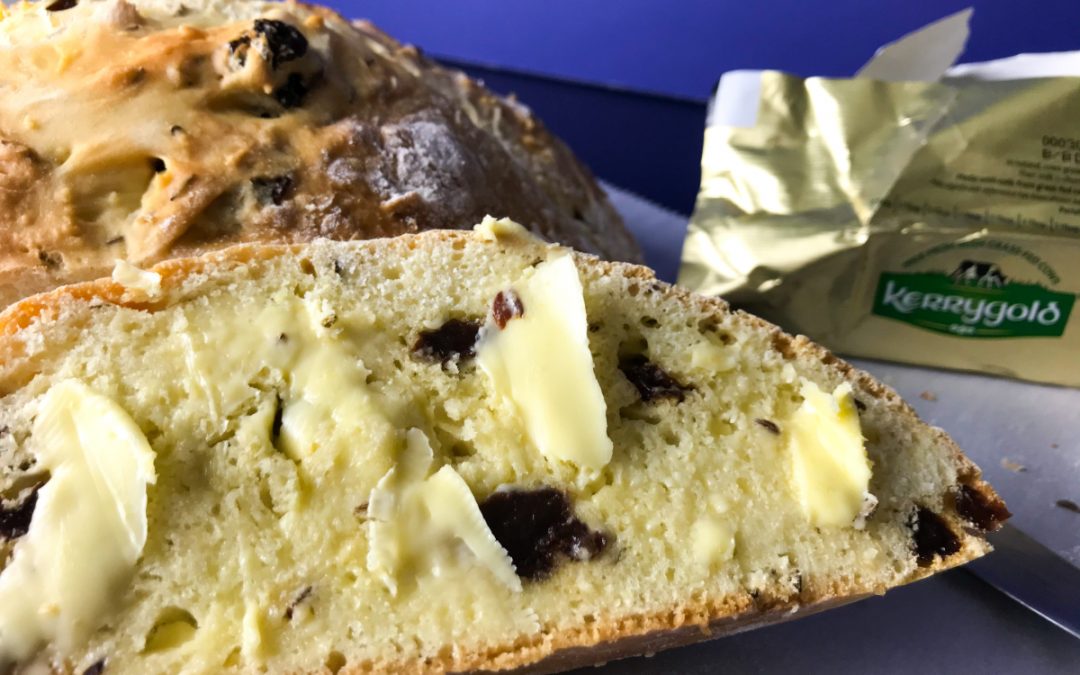 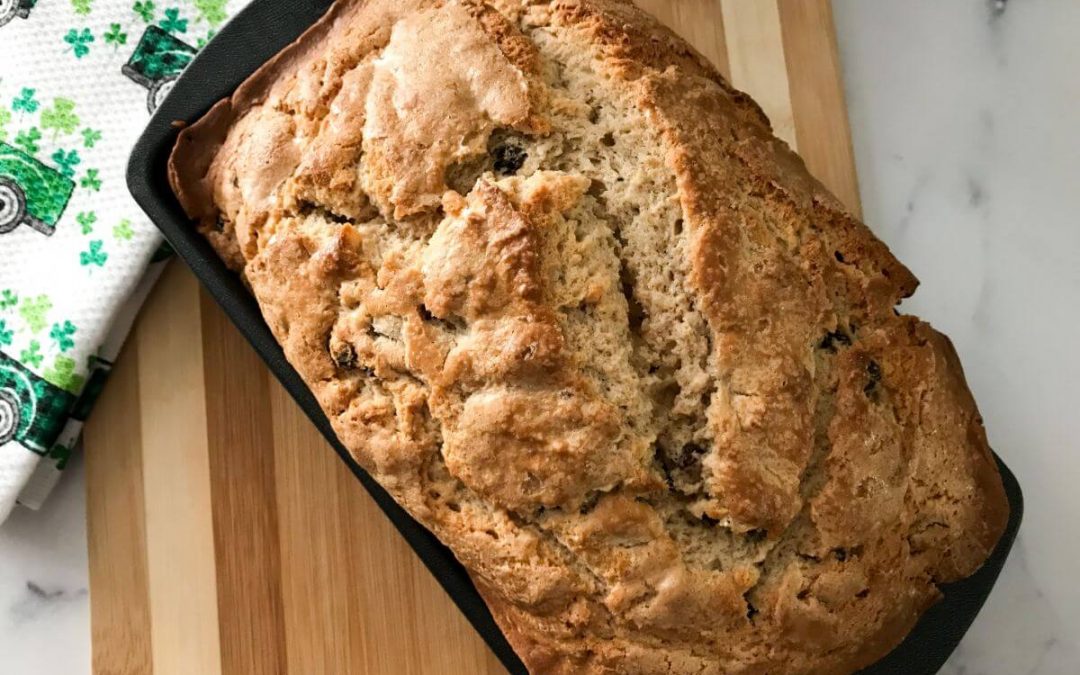 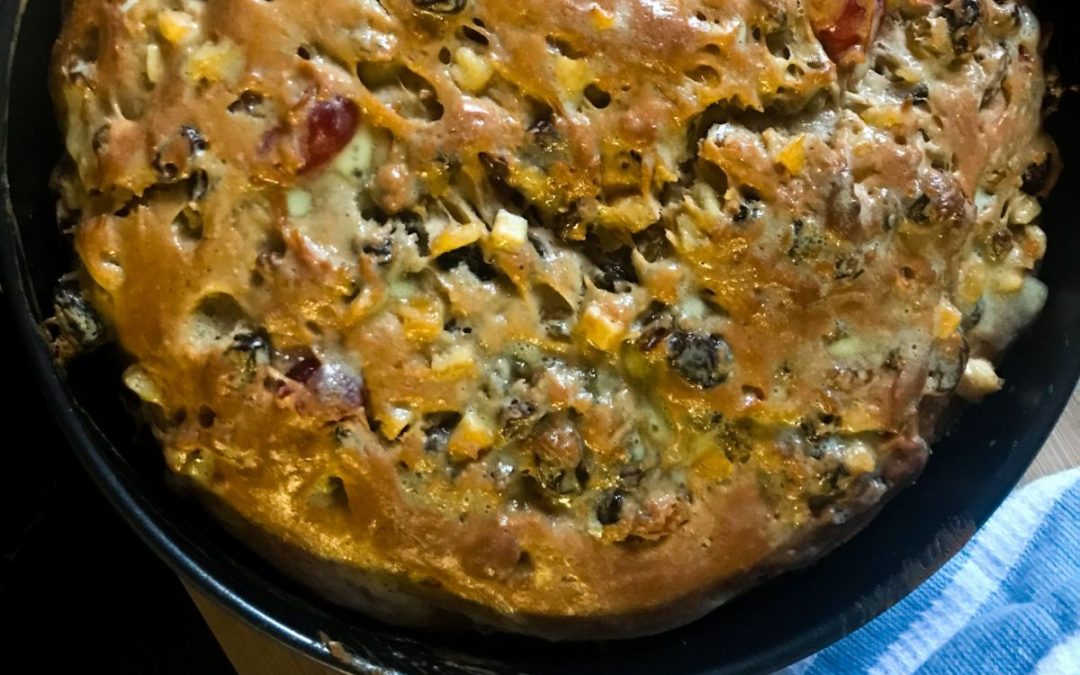 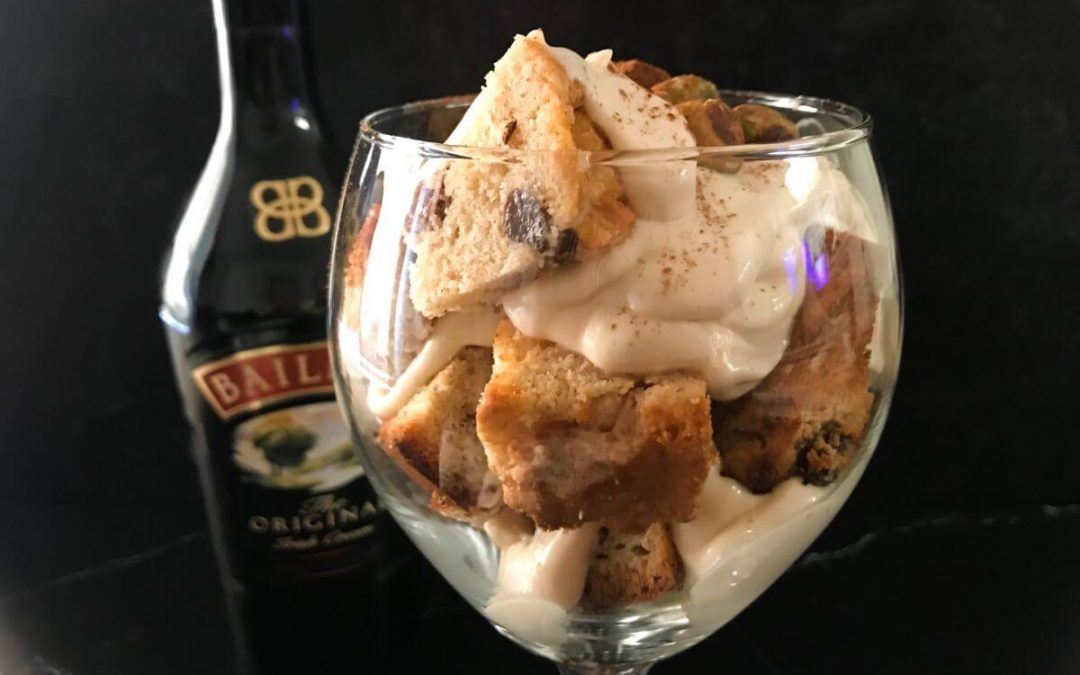