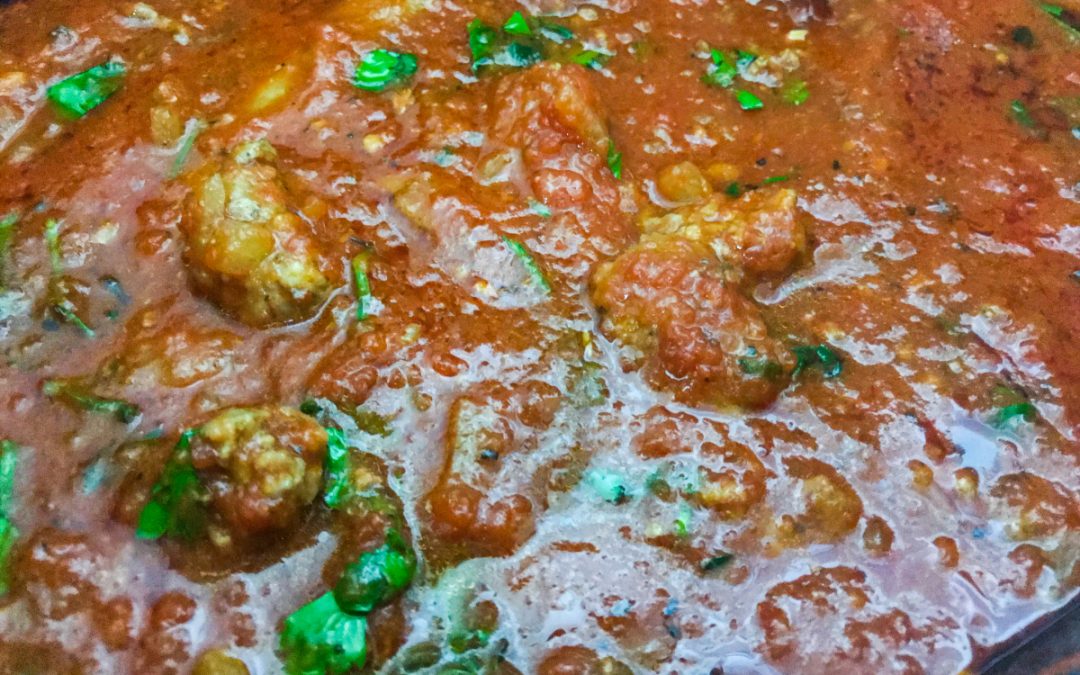 2 hours 40 mins
My Curated Tastes is reader-supported. When you buy through links on our site, we may earn an affiliate commission at no extra cost to you.

Salt and Pepper to Taste

1. Add the oil to a very large sauté pan. Heat over a medium high heat. Add the onions and cook for about 3-5 minutes until the onions are soft. Add the garlic and stir for another minute until fragrant.
2. Add the sausage meat and chopped meat breaking it up with a wooden spoon until it is in smaller pieces. Cook until well browned.
3. Add the can of tomato paste and two cans of water (use the same tomato paste can) Stir to incorporate the paste into the meat mixture.
4. Add the chili, garlic powder, oregano, sugar, bay leafs, salt and pepper. Stir into the mixture. Cook for about 10 minutes to incorporate all the flavors.
5. Meanwhile, blend the two cans of whole tomatoes in a blender and add to a large pot. Heat on medium heat. Add the meat mixture to the large pot and stir to incorporate. Bring to a rapid simmer and then lower to medium low heat and let cook about 2 hours.
6. Be sure to taste and adjust seasoning as needed. (Add more salt, pepper or chili flakes if you like it a little spicier.) Remove bay leaves and serve over your favorite pasta or use in one of my baked Italian dishes. Top with grated cheese and a big dollop of the herbed ricotta. Enjoy.

Mix all the ingredients in a small bowl and serve on the side with pasta dishes. You can refrigerate this until ready to use. It will hold in the refrigerator for several days.

NOTE: When I still lived in NYC, I was dating an Italian guy whose mothers name was Pee Wee (Yes, that is what everyone called her!). This woman dragged me into the kitchen to show me how to make a proper Italian, meat sauce. I’m sure she thought her son would starve to death dating an Irish Lithuanian woman who had never cooked! Little did she know, that I loved the idea of cooking and this was one of the first successful things I learned to make. The challenge writing this down is that there were never any measurements given. It was a pinch of this, a scoop of that and maybe a palm full of something else. In those early days, it was a lot of trial and error on my part. But she’d nod in approval or suggest more or less of something until I could actually make this sauce by taste alone. (You can see the original “recipe” below with all its sauce stains, scribbles and notably, no measurements.) Over the years, I’ve added additional spices, done only turkey sausage or turkey meat, cut back on the oil and eliminated the sugar. But, every once in awhile, I pull this out and do it just the way it was written. There is no getting around it; this is a great, all American Italian pasta sauce from the Big Apple!

I use Red Pack tomatoes because she did. Not only that, but they are a New York staple for making Pizza Sauce. So, I order them from Amazon (since I can’t find them here in California). I’ve made this sauce with every kind of canned tomatoes and they all work. Feel free to substitute your favorite brand. You won’t be hurting my feelings!

Pee Wee was always adding additional meat. She’d brown Italian sausage (sweet and hot) and meatballs, then add them to the sauce and let them cook right along with the sauce. She would also brown pork chops and add those too. They’d be served on the side as an addition on to the big bowl of pasta. So, feel free to do just that. Top with some fresh Parmesan or Pecorino cheese and don’t forget to add my herbed ricotta. (I think PeeWee would have approved.) 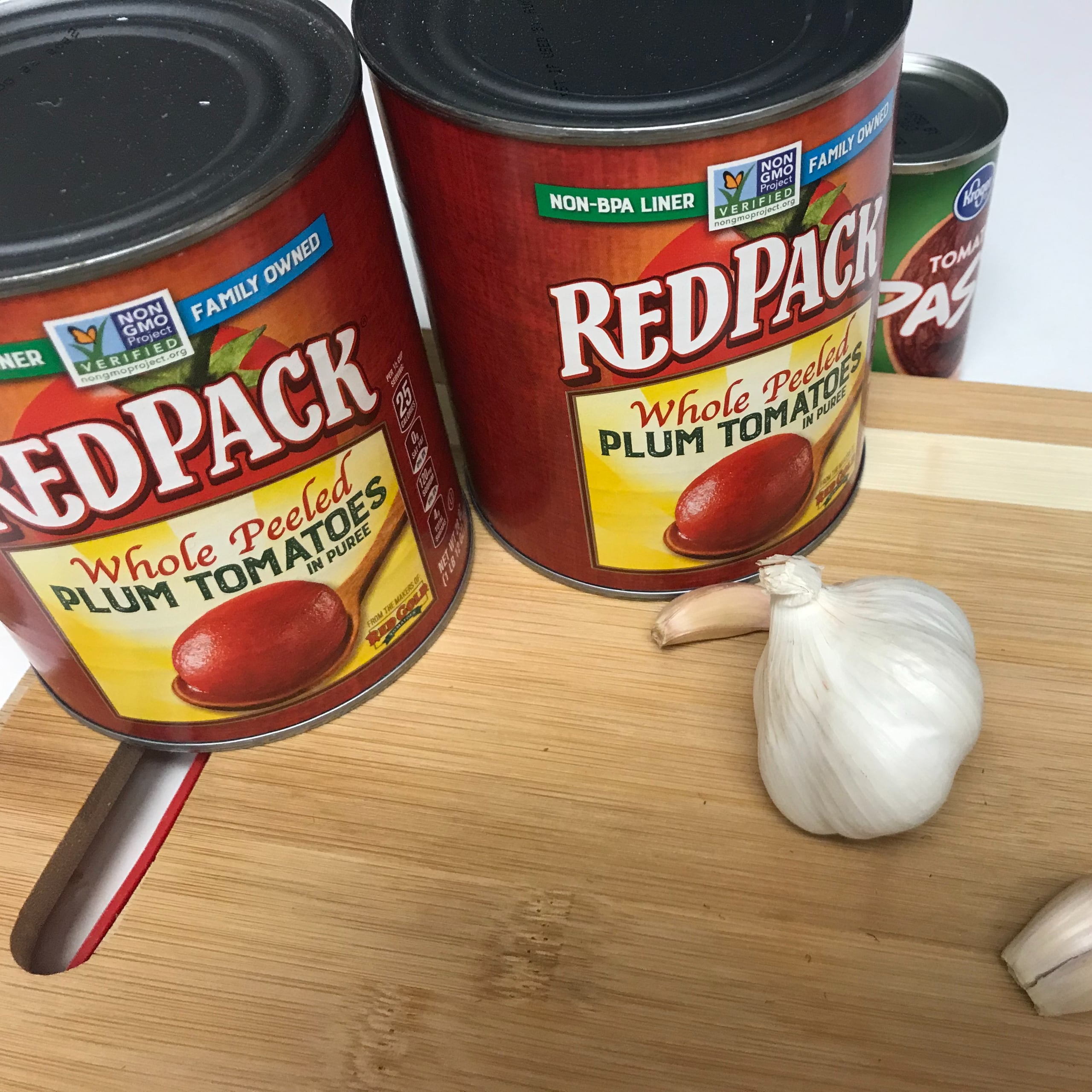 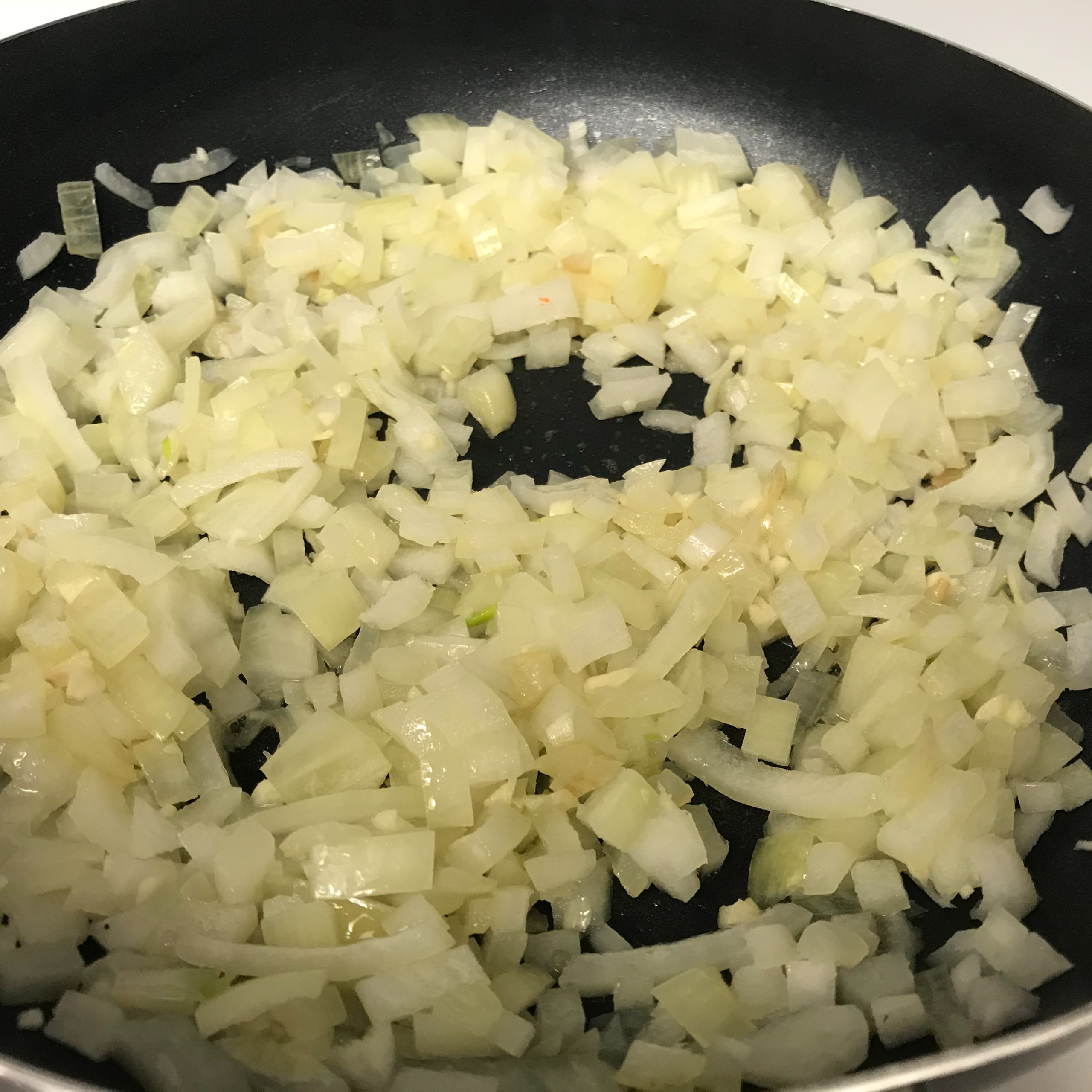 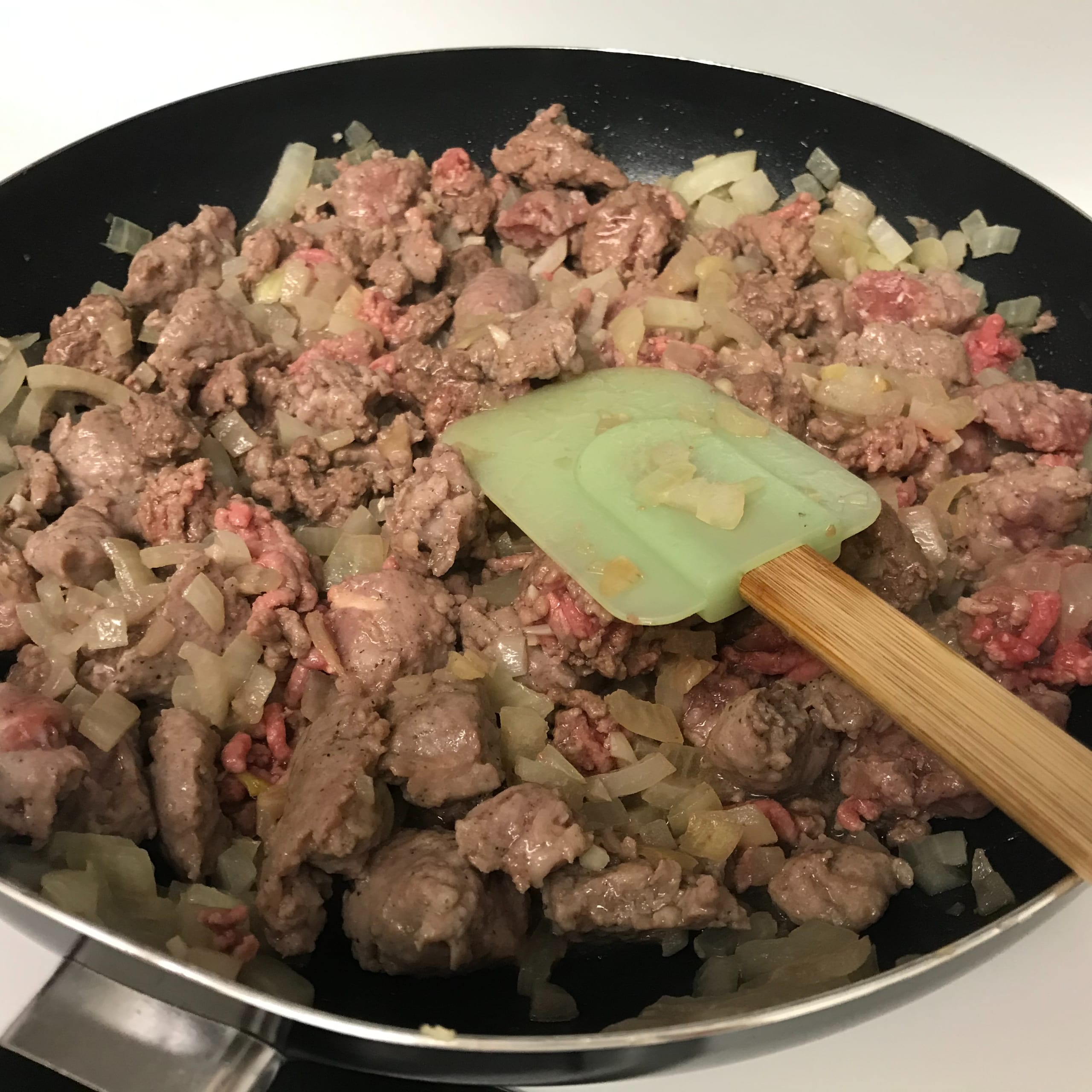 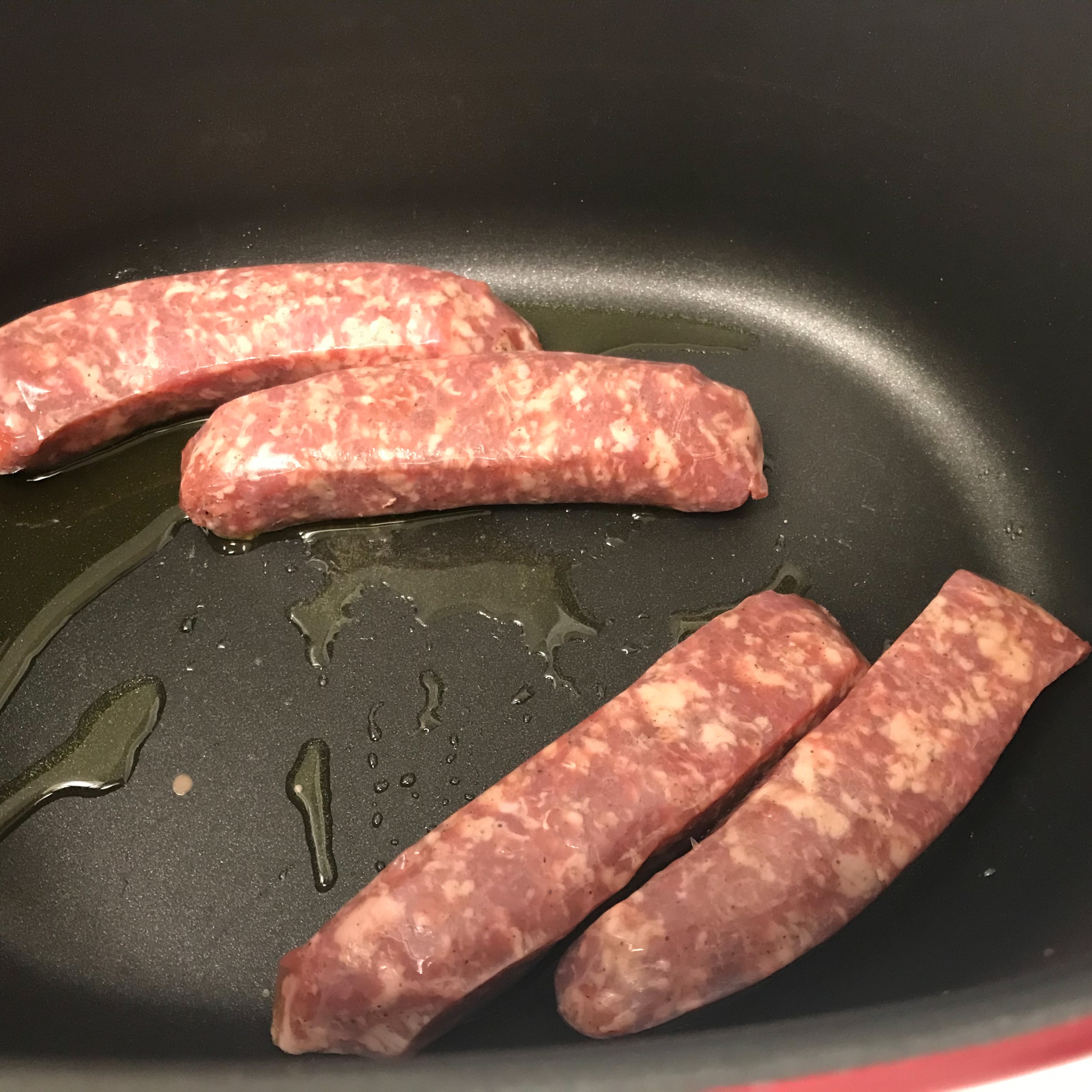 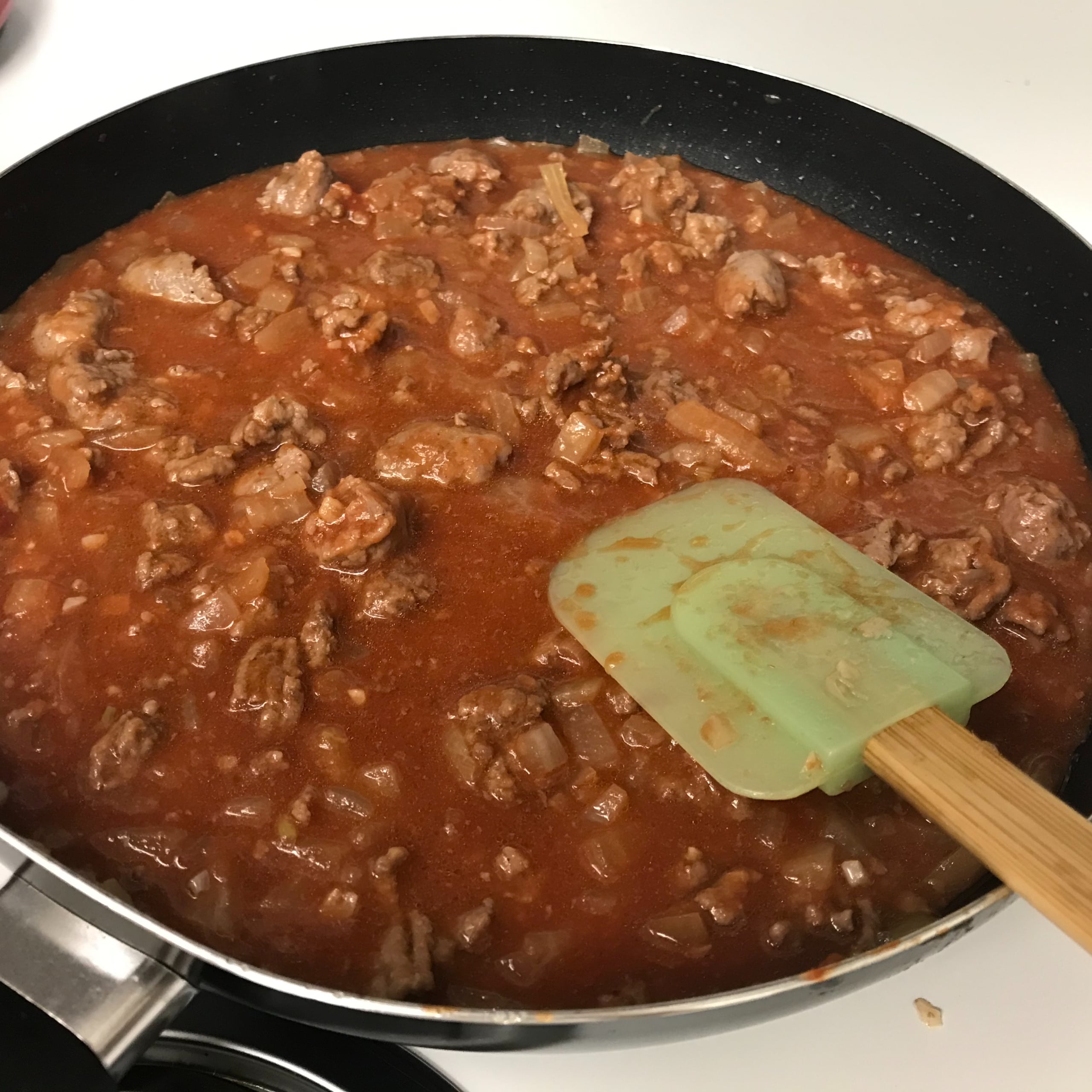 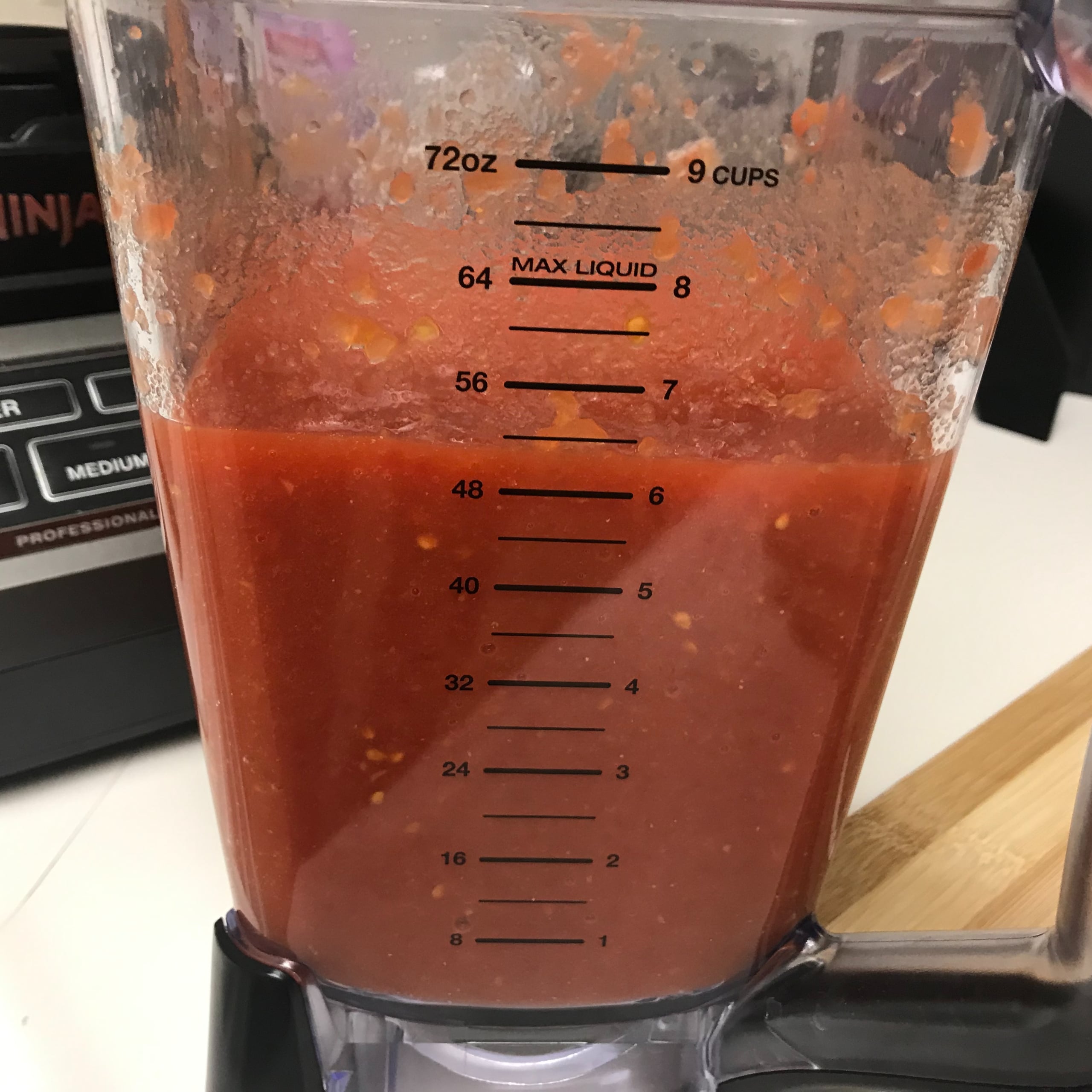 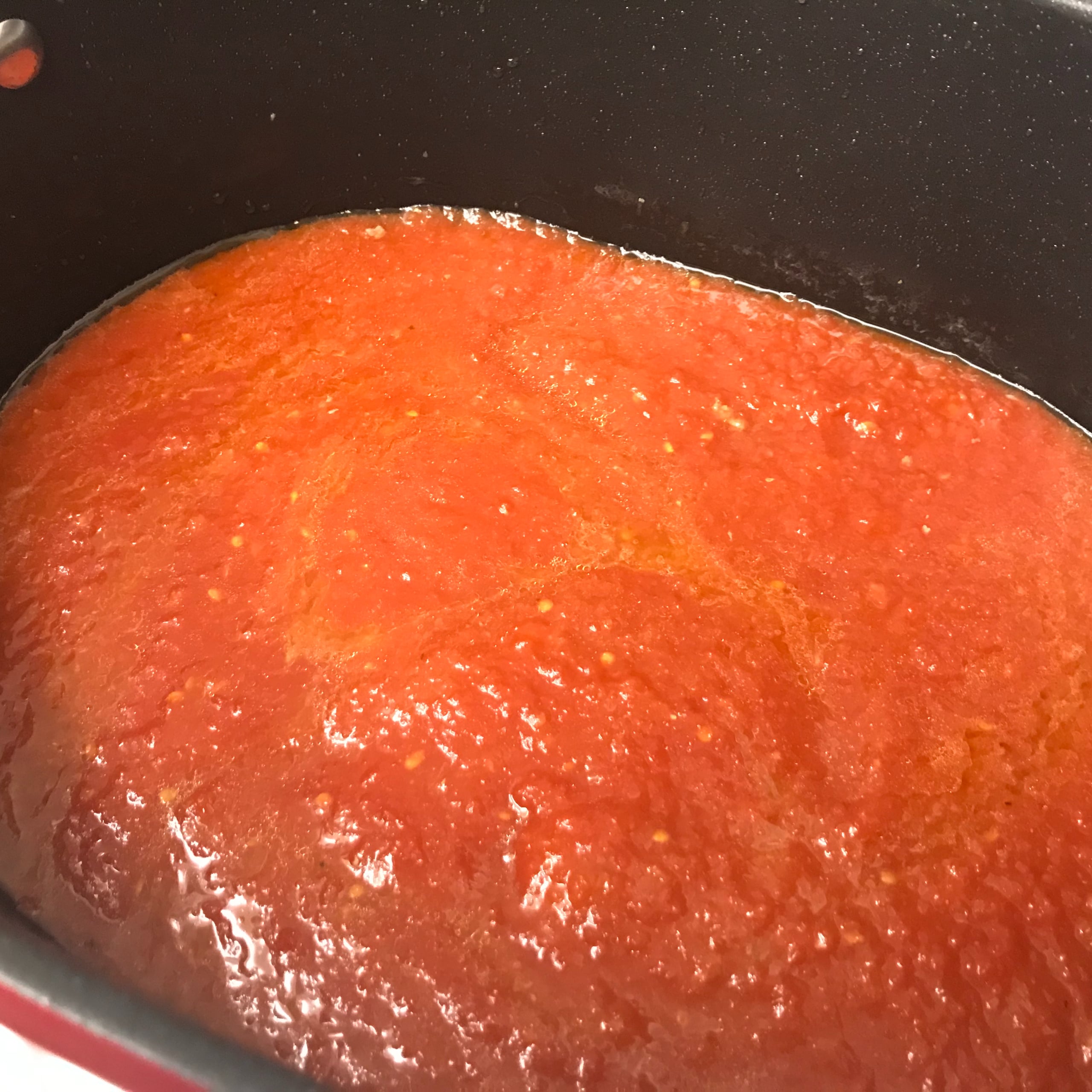 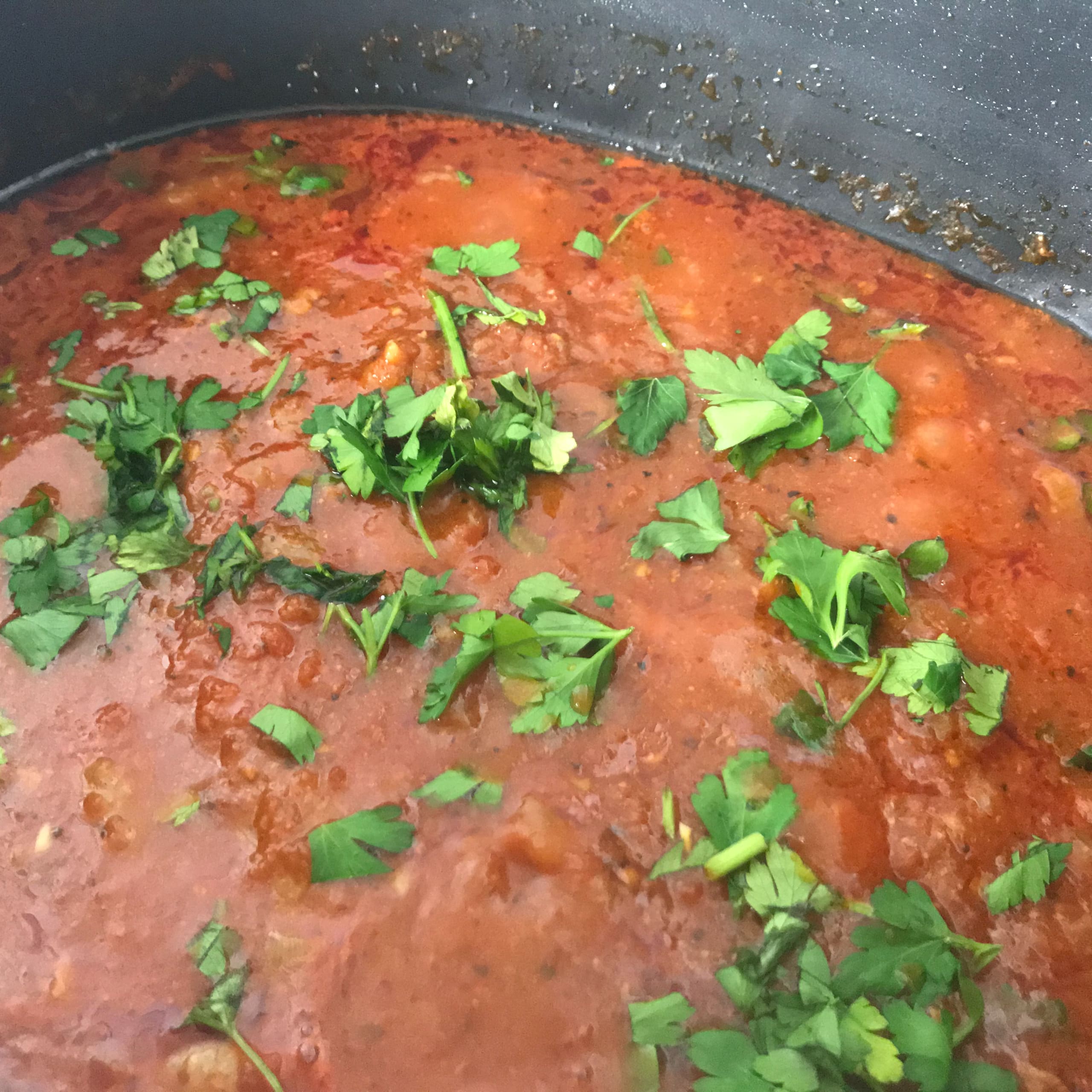 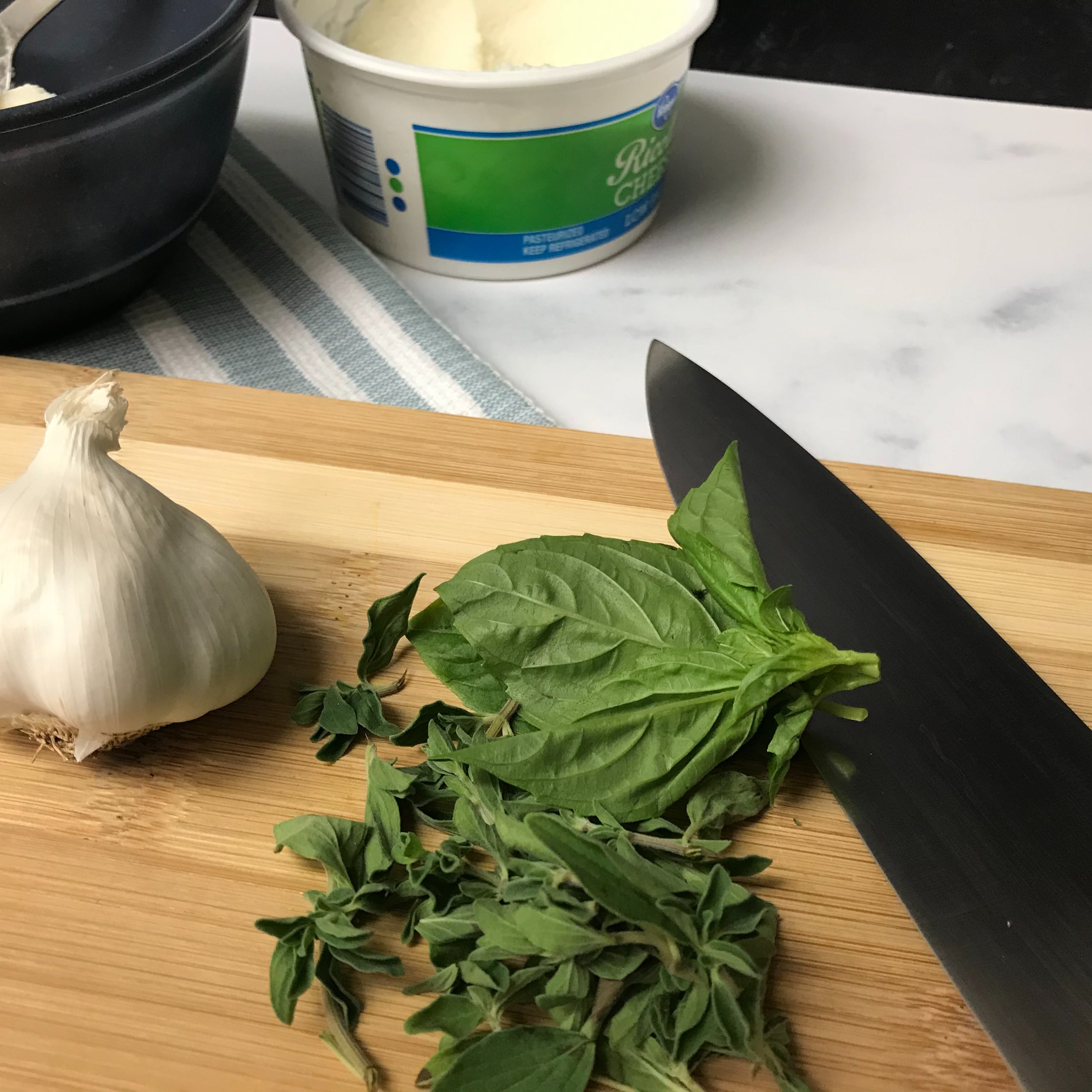 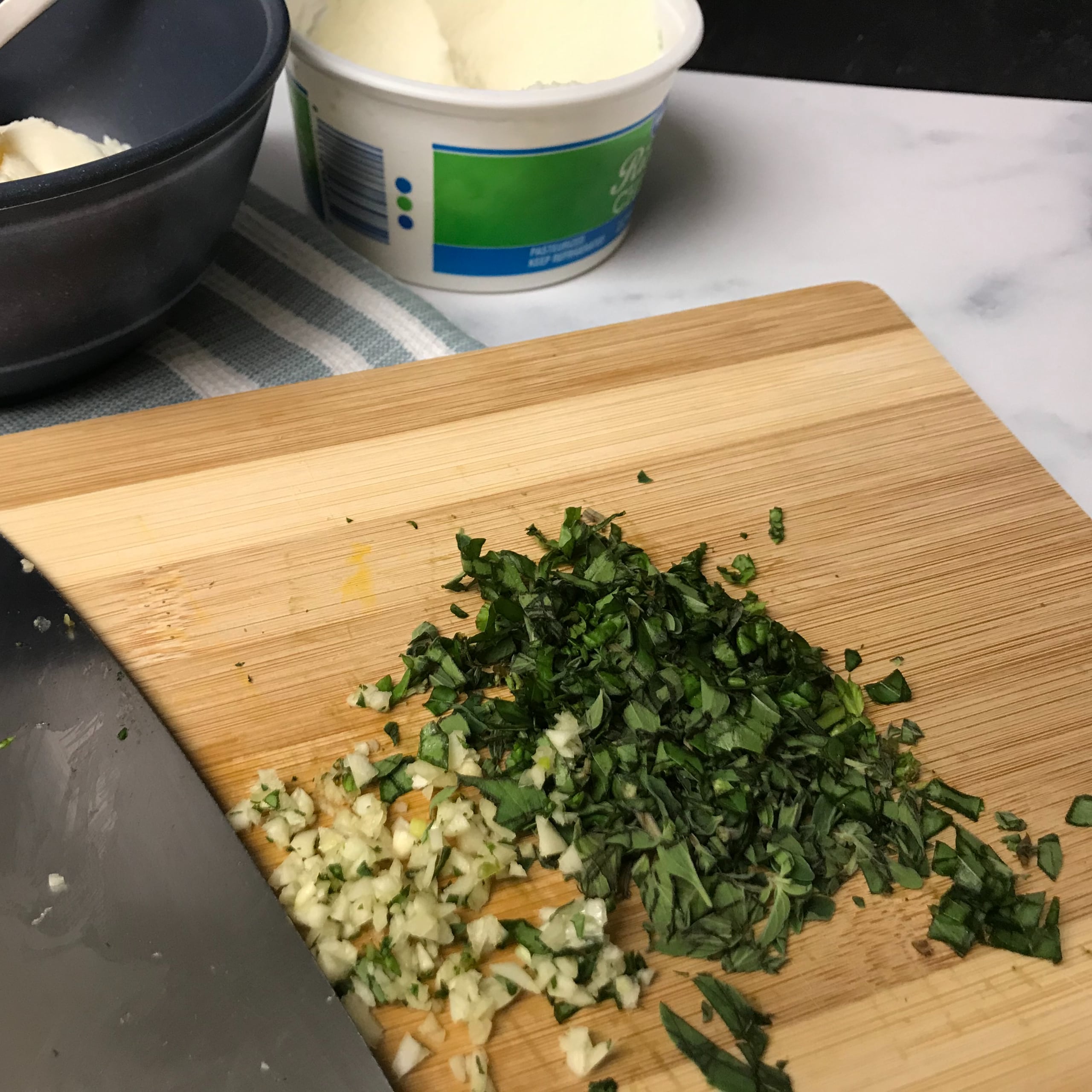 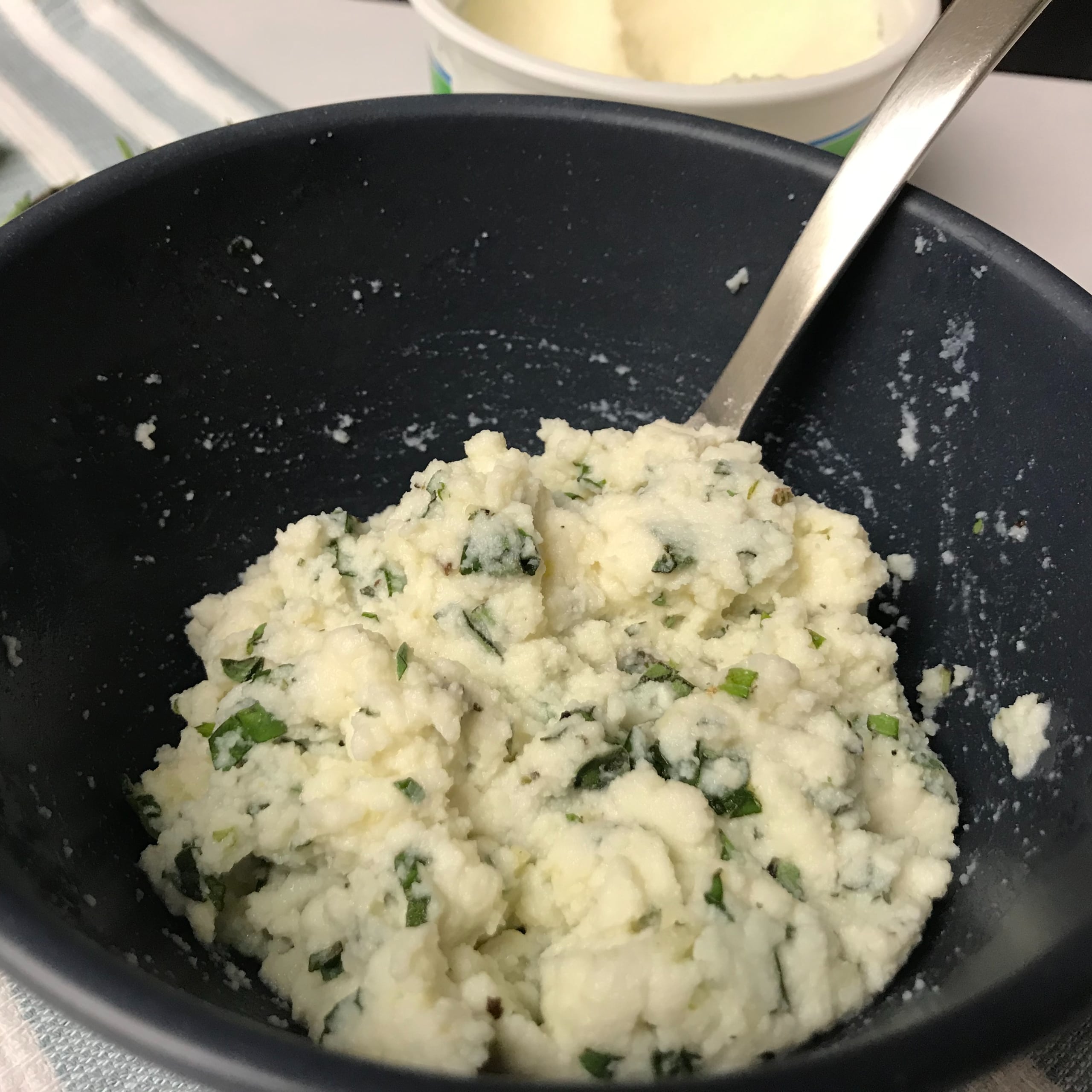 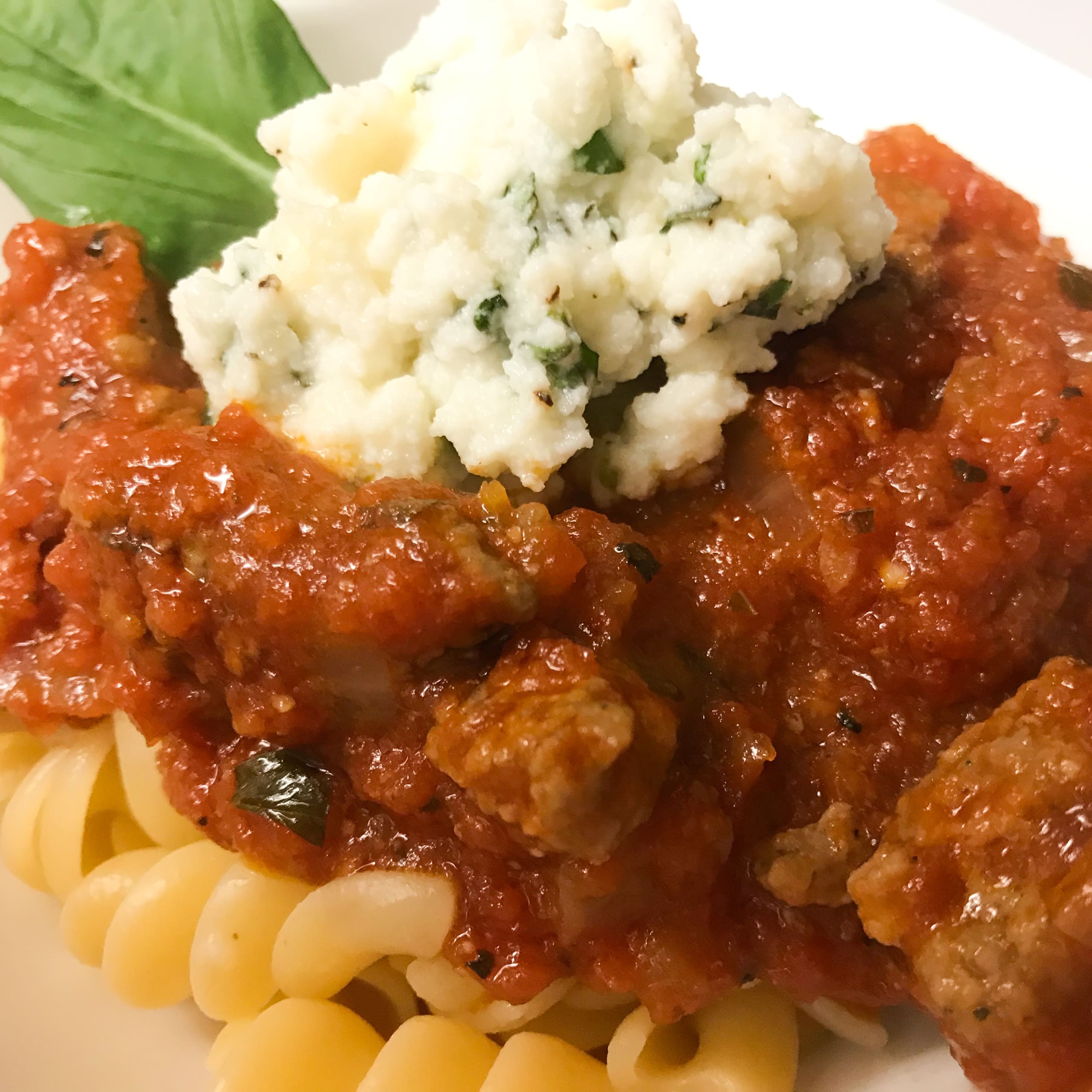 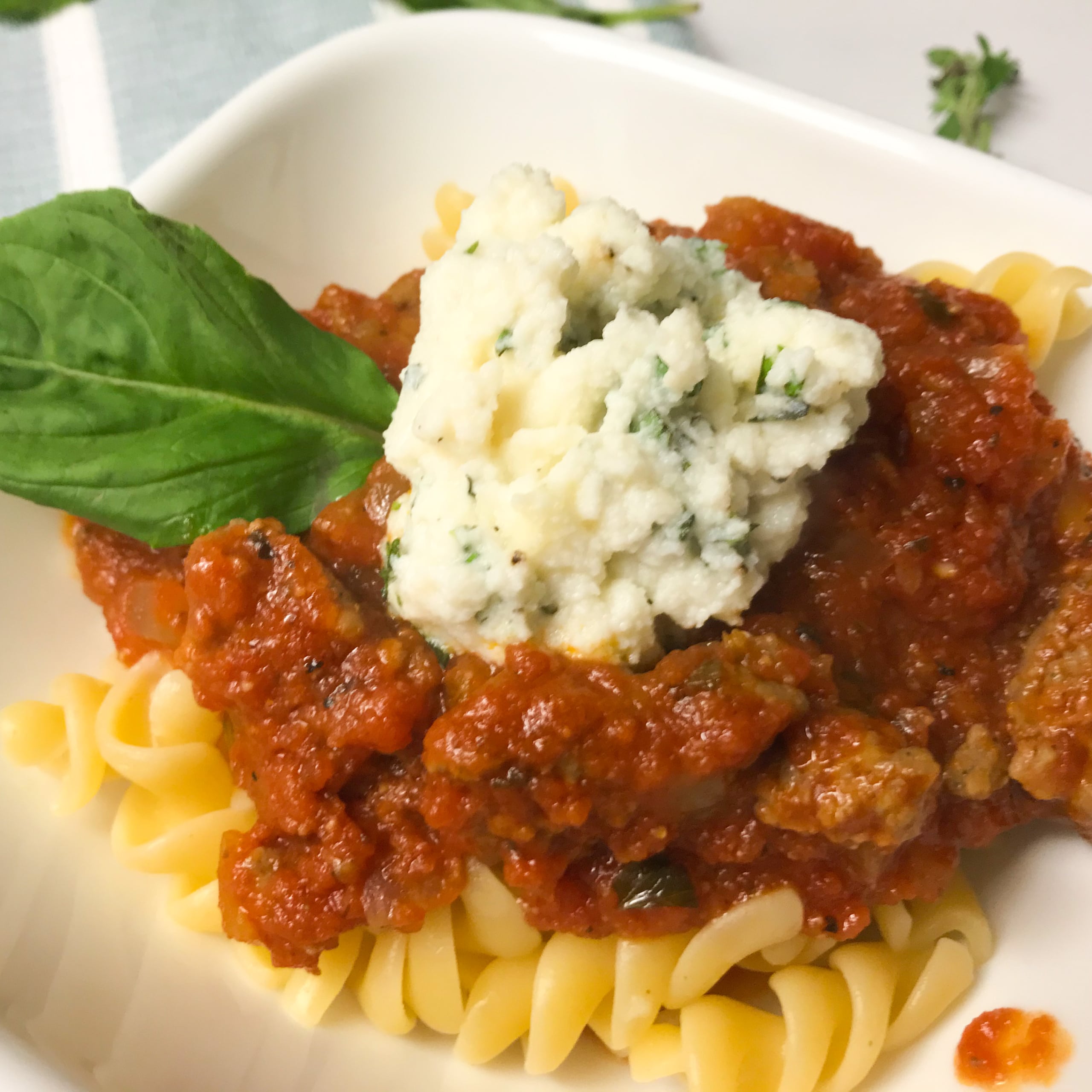 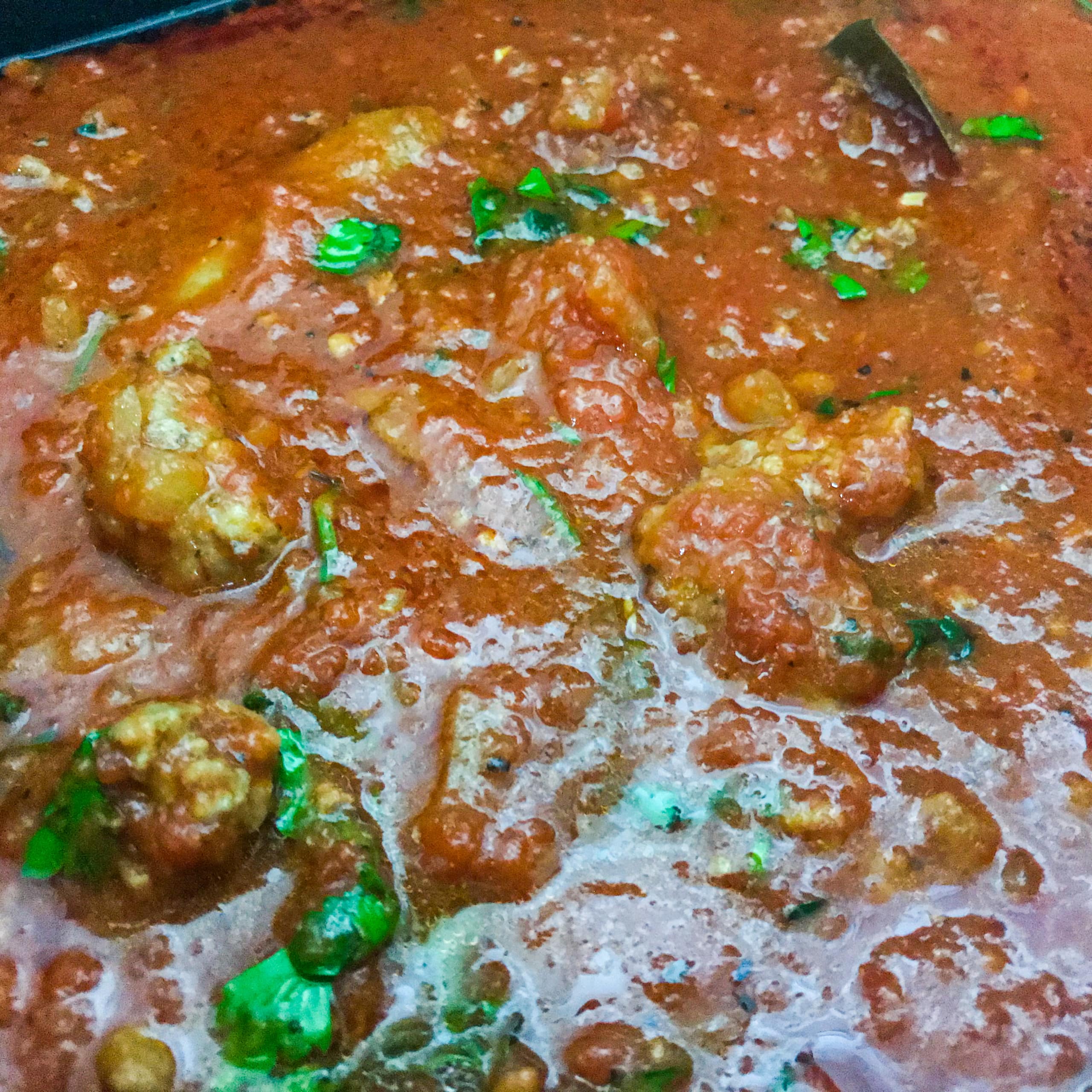 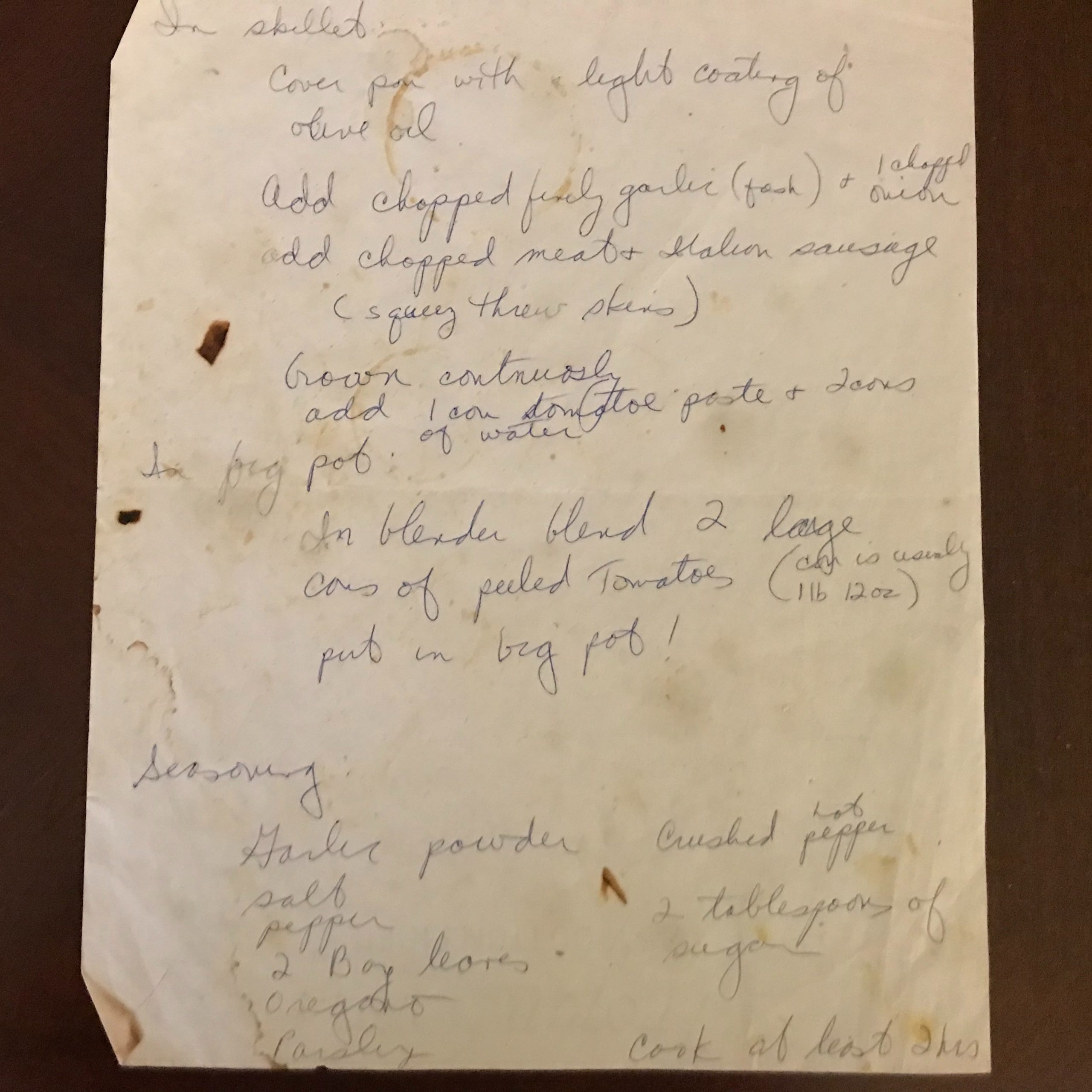