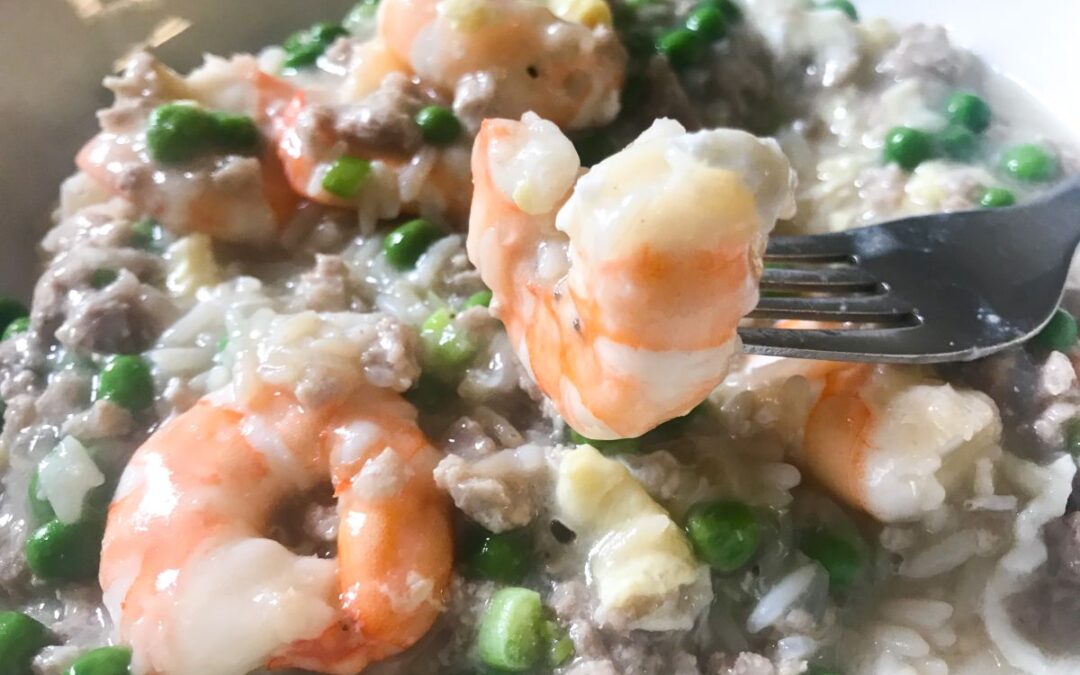 0 hours 20 mins
My Curated Tastes is reader-supported. When you buy through links on our site, we may earn an affiliate commission at no extra cost to you.

1) Peel and devein the shrimp.  Remove the tails.

2) Boil water on the stove and stir in the ground pork. Break up any clumps and cook for about 1 minute, until the pork is no longer pink. Drain the pork in a mesh strainer and give it a quick rinse.  Blot dry with a paper towel.

3) Place a wok or large skilled over medium-high heat. Add the canola oil, garlic, ground pork, and shrimp and stir-fry for about 30 seconds. Then, add the mirin and stir-fry for another 10 seconds. Add the chicken stock, sesame oil, sugar, salt, and pepper.   Stir.  Add the peas and stir int0 the mix.

4) Once the mixture comes to a simmer, stir in the cornstarch slurry a little bit at a time. Let the mixture bubble and thicken. It should be able to coat a spoon, but it shouldn’t have a gloopy consistency. If it gets too thick, add a little more chicken stock. If it’s too thin, add more of the cornstarch slurry.  This whole thing comes together quickly so have your beaten egg and chopped onion ready.

5) Spread the slightly beaten egg and green onion across the mixture and let simmer on top for about 5 seconds. Use your spatula to fold the egg into the sauce and gently stir to incorporate.

6) Serve the shrimp and lobster sauce over rice (white or brown). Enjoy!

NOTES:  This was my all time favorite Chinese dish when eating out as a kid.  I considered it my first “grown up meal” because I graduated to this after the orange chicken most kids love.  I’ve learned that I love a good sauce over a bowl of rice… and that holds true for almost every cuisine.  I think the reason I liked this so much as a kid was because it is very mild in taste, creamy and really Asian comfort food to me.  As I got older, I’d add a splash of soy sauce and a dollap of hot chinese mustard to spicy it up.  Some of those crispy Chinese noodles on top definitely add crunch so feel free to add those too. This recipe is a straight up, authentic recipe… you decide what goes on top!

The thing I never understood was why it was called Lobster sauce since there isn’t a piece of lobster to be found in the sauce.  So, of course, I googled.  Turns out there are multiple theories about the name, starting with it was originally a sauce made to put ON lobster.  Another theory is that the dish originally used lobster but over the years was adapted for a less expensive ingredient, shrimp.  What is for sure is that it is a Cantonese recipe and one that has been made here in the states since at least 1945.  (earliest copyrighted book with the recipe).

But, more importantly is that this is such a fast, easy and delicious dish.

The key to cooking a lot of Chinese dishes is having all your ingredients, measured, chopped and ready to go.  The dish moves very fast when you are cooking so you want everything prepped and near by.  Working quickly will keep the shrimp from overcooking and will keep the sauce nice and thick but not goopy.

One note on working with the ground pork.  It might seem unusual to boil it, drain it and rinse it but that removes a ton of fat and keeps the sauce clear.  So this is an important step in this dish.  Don’t skip it.

If you like this dish, be sure to try some of my other Asian inspired dishes like Chinese Potato Bird Nests with Shrimp and Veggies,  Healthier Orange Chicken, Asian Marinated Cod or my Asian Beef and Veggie Rolls. 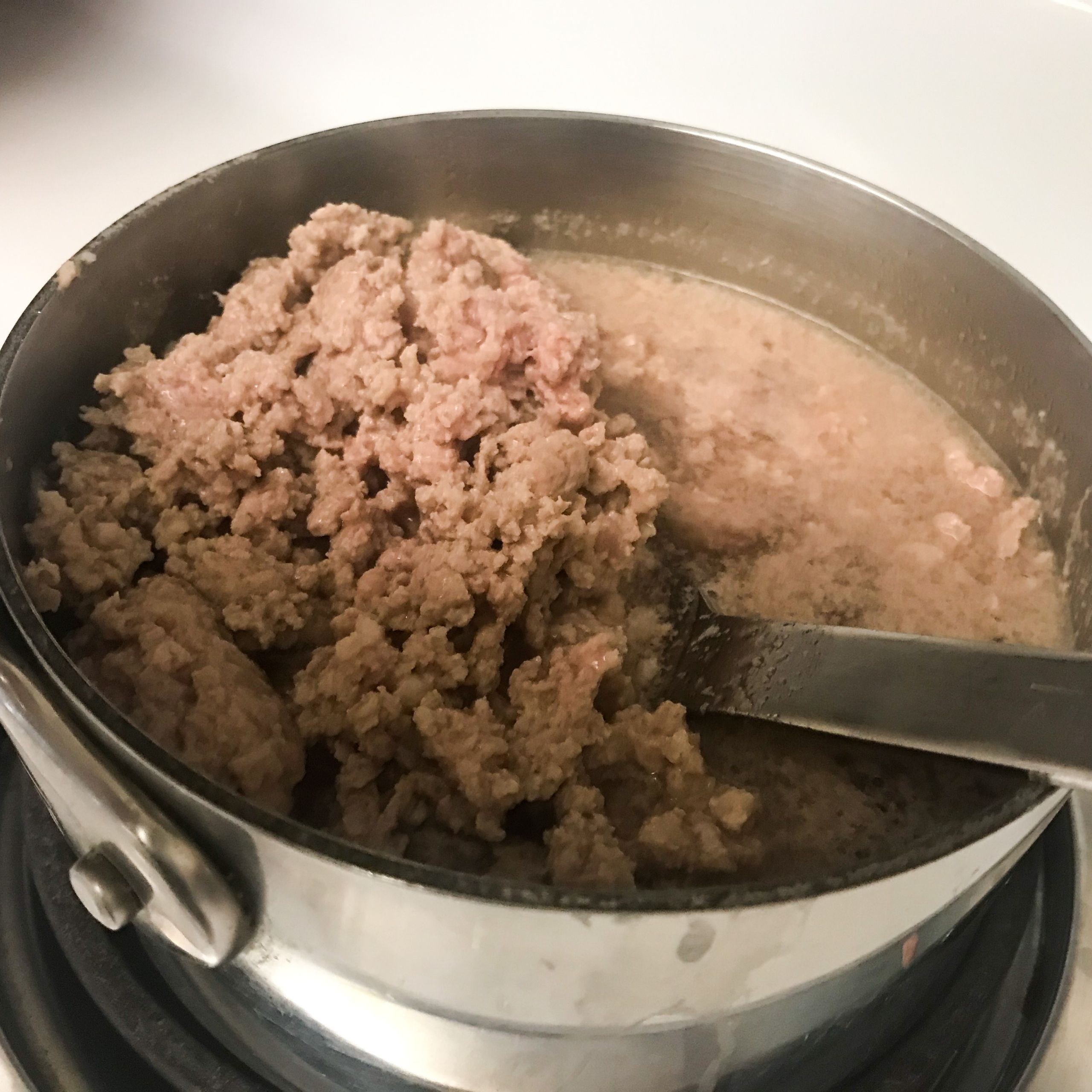 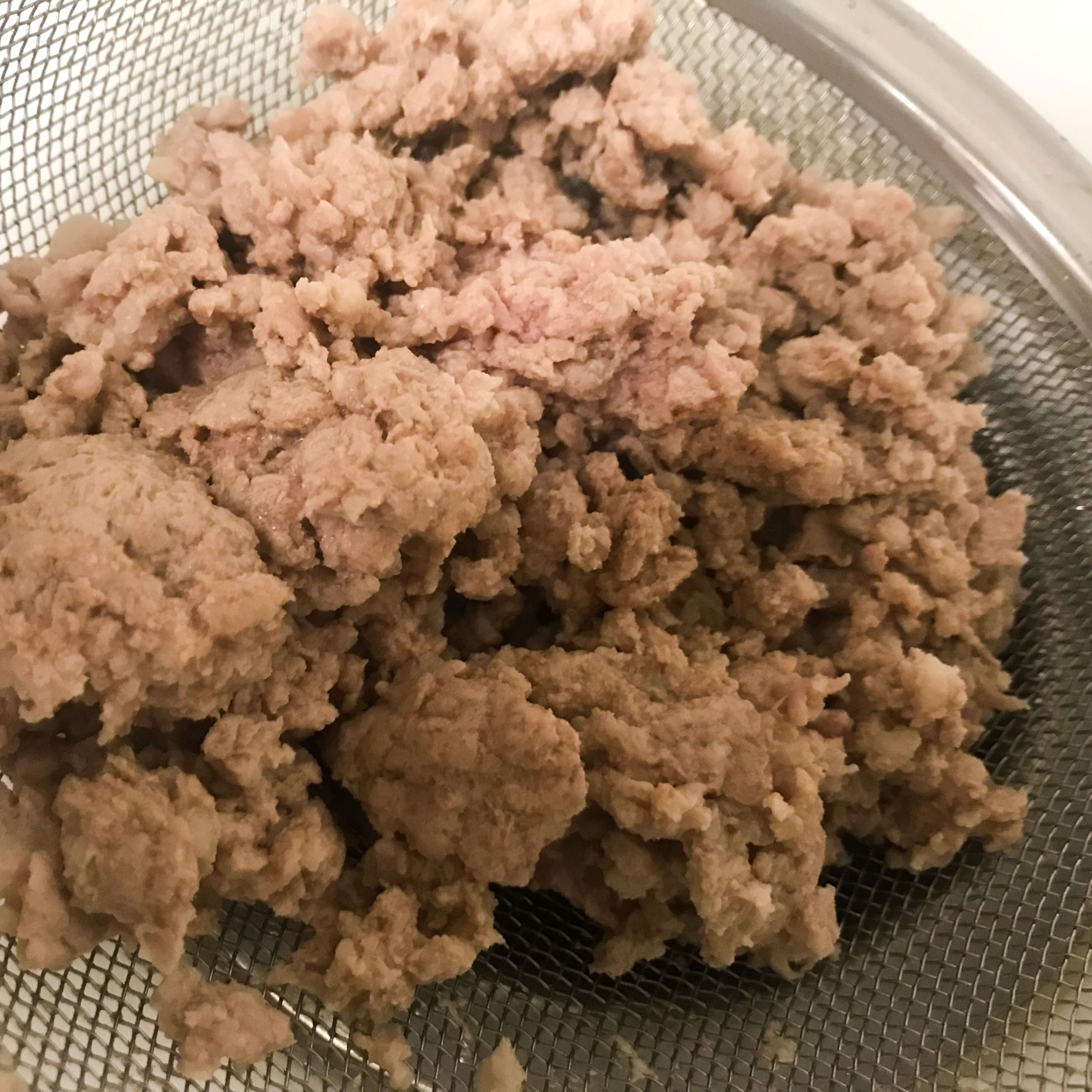 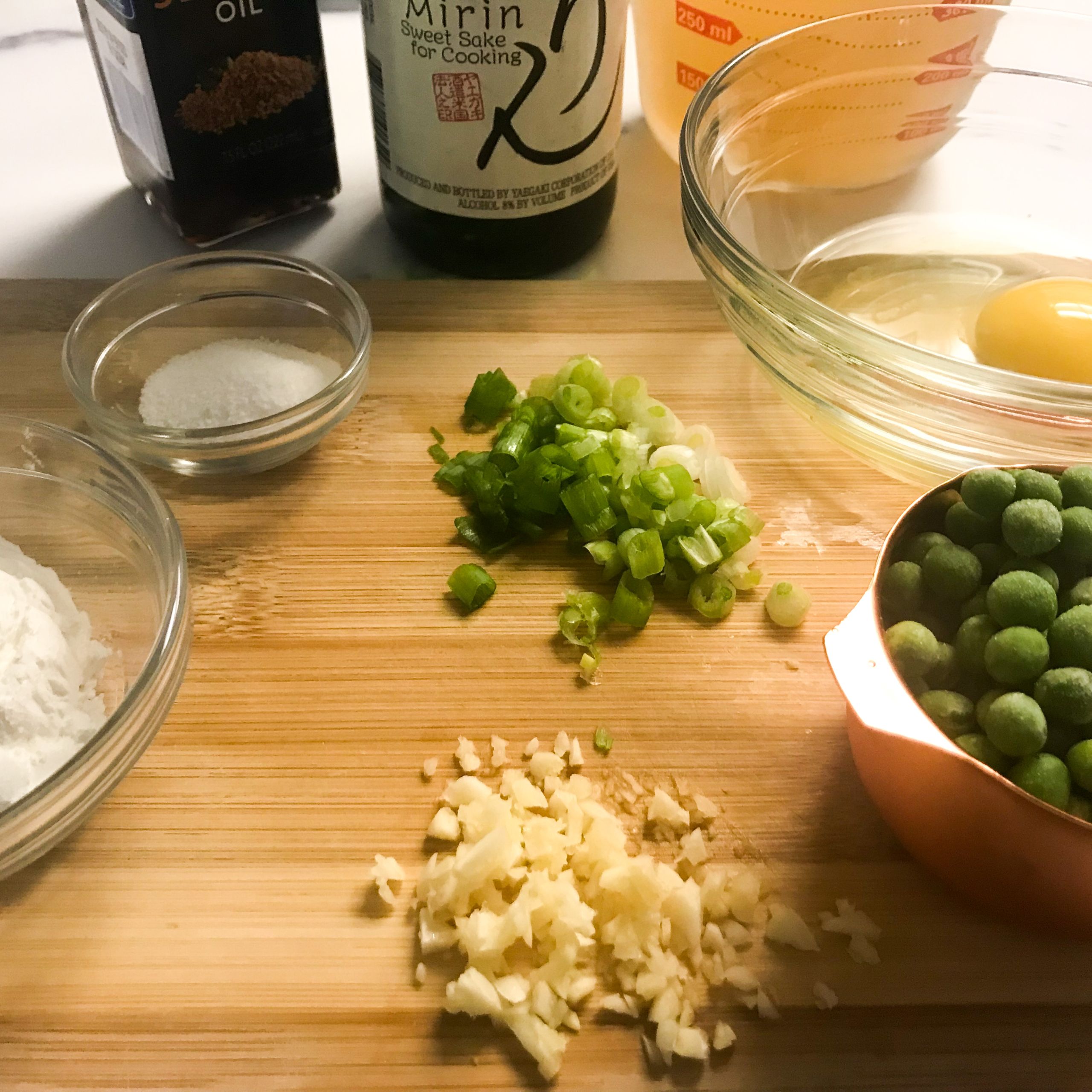 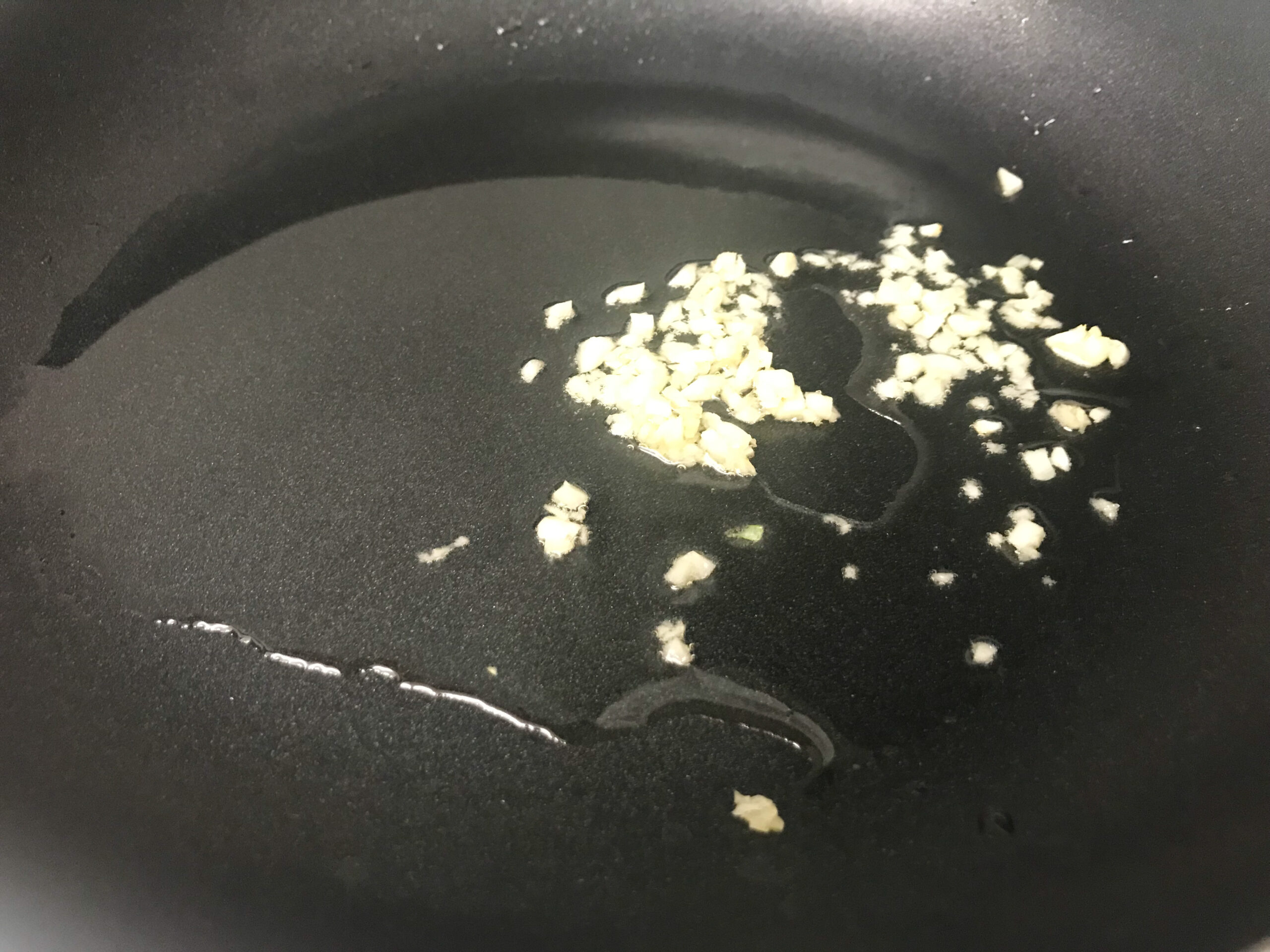 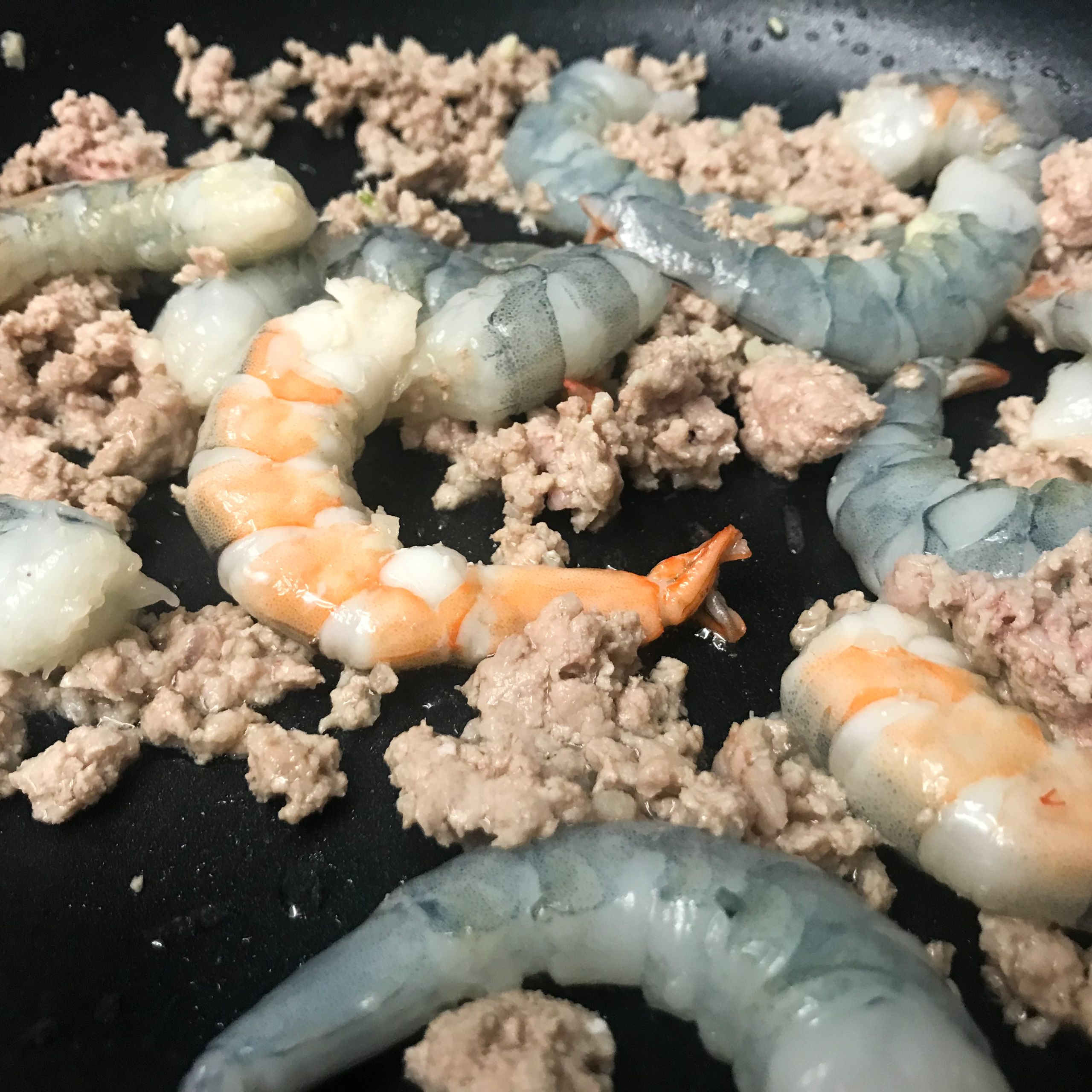 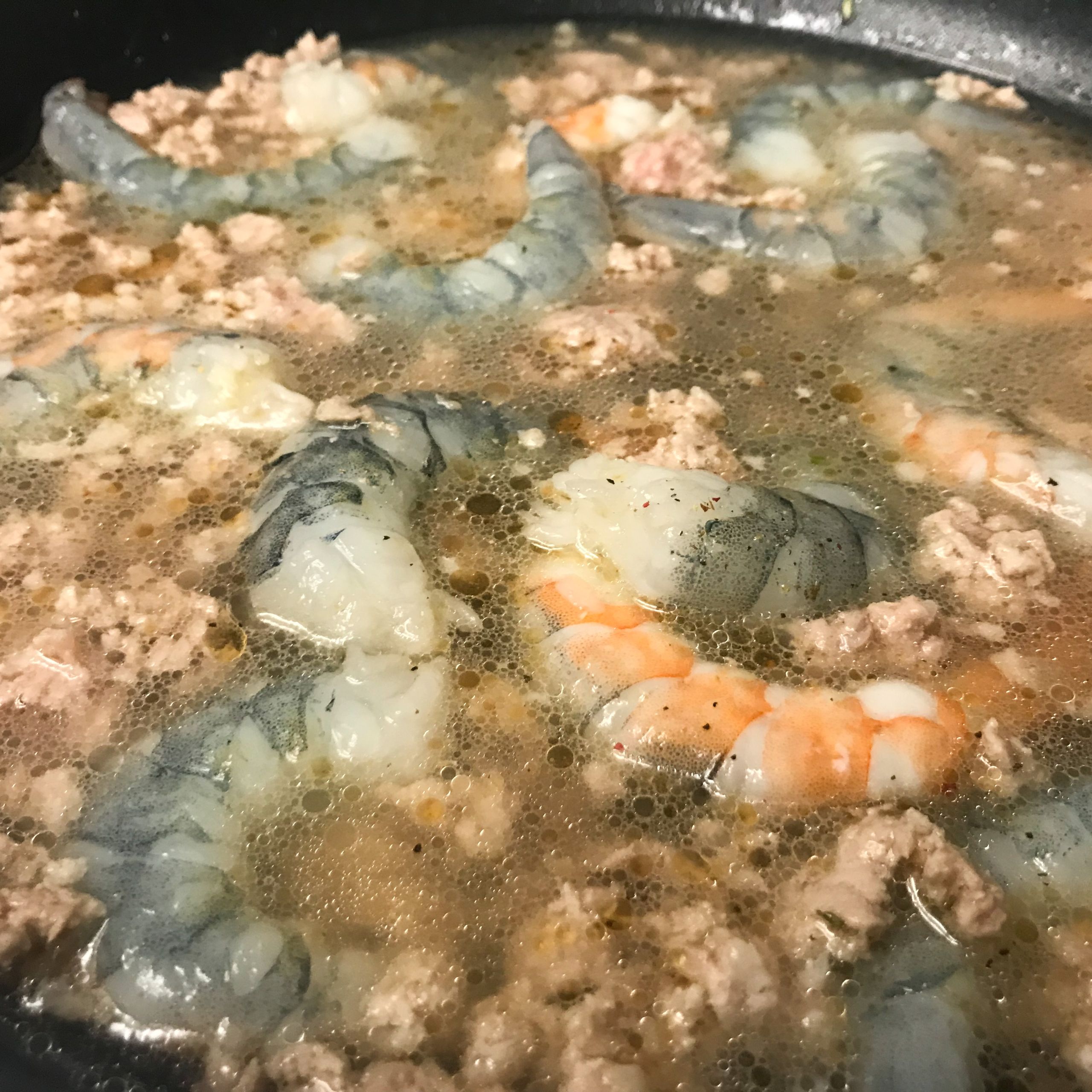 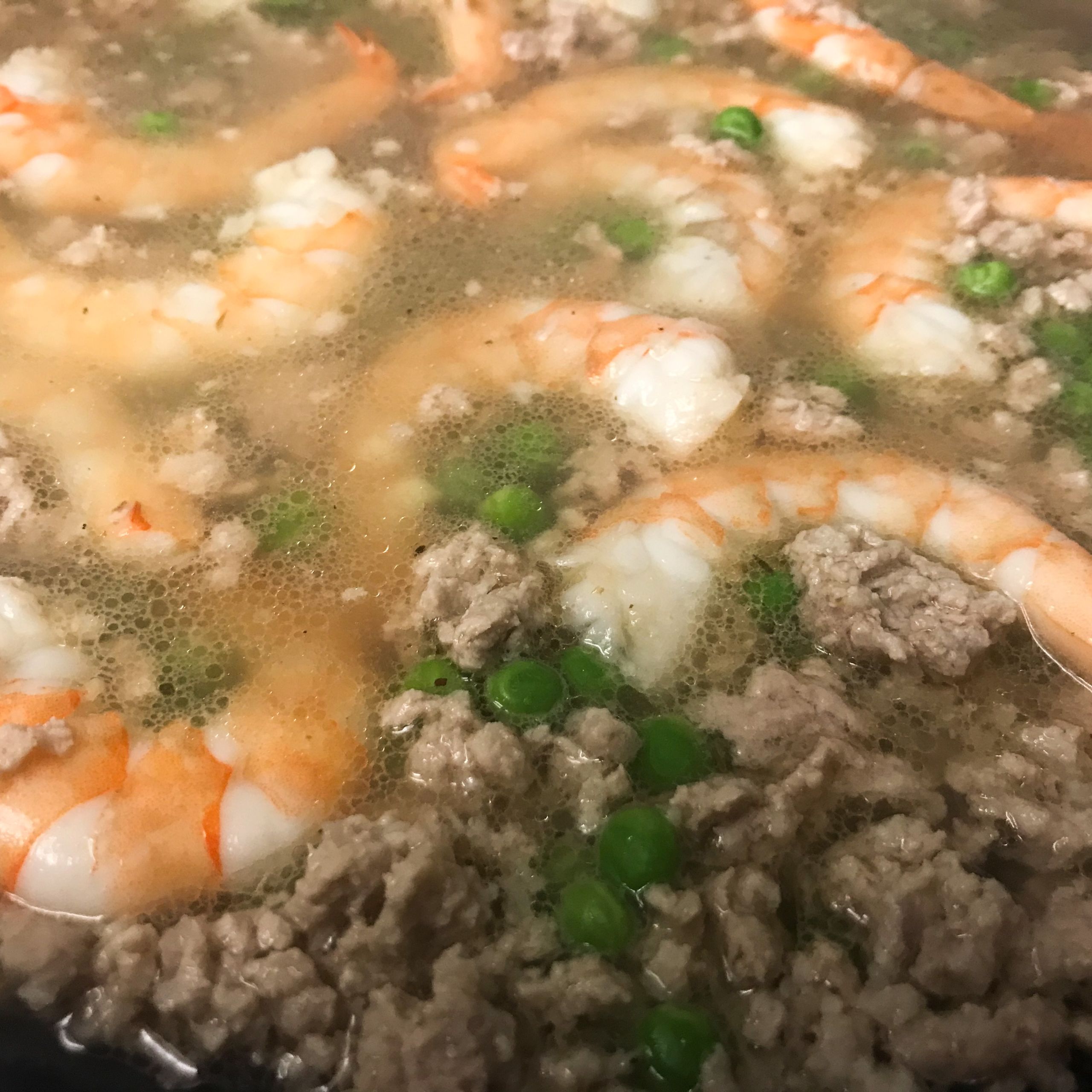 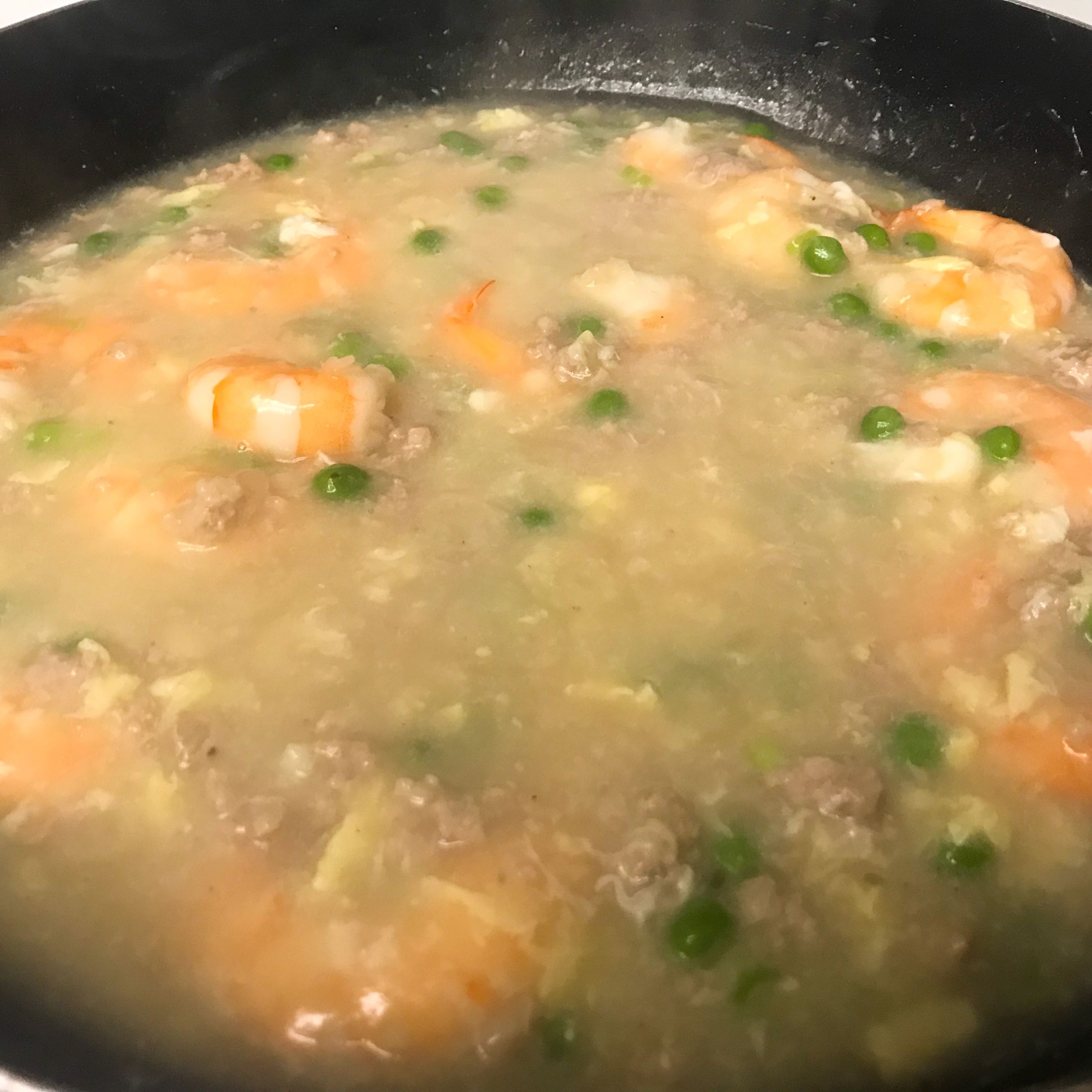 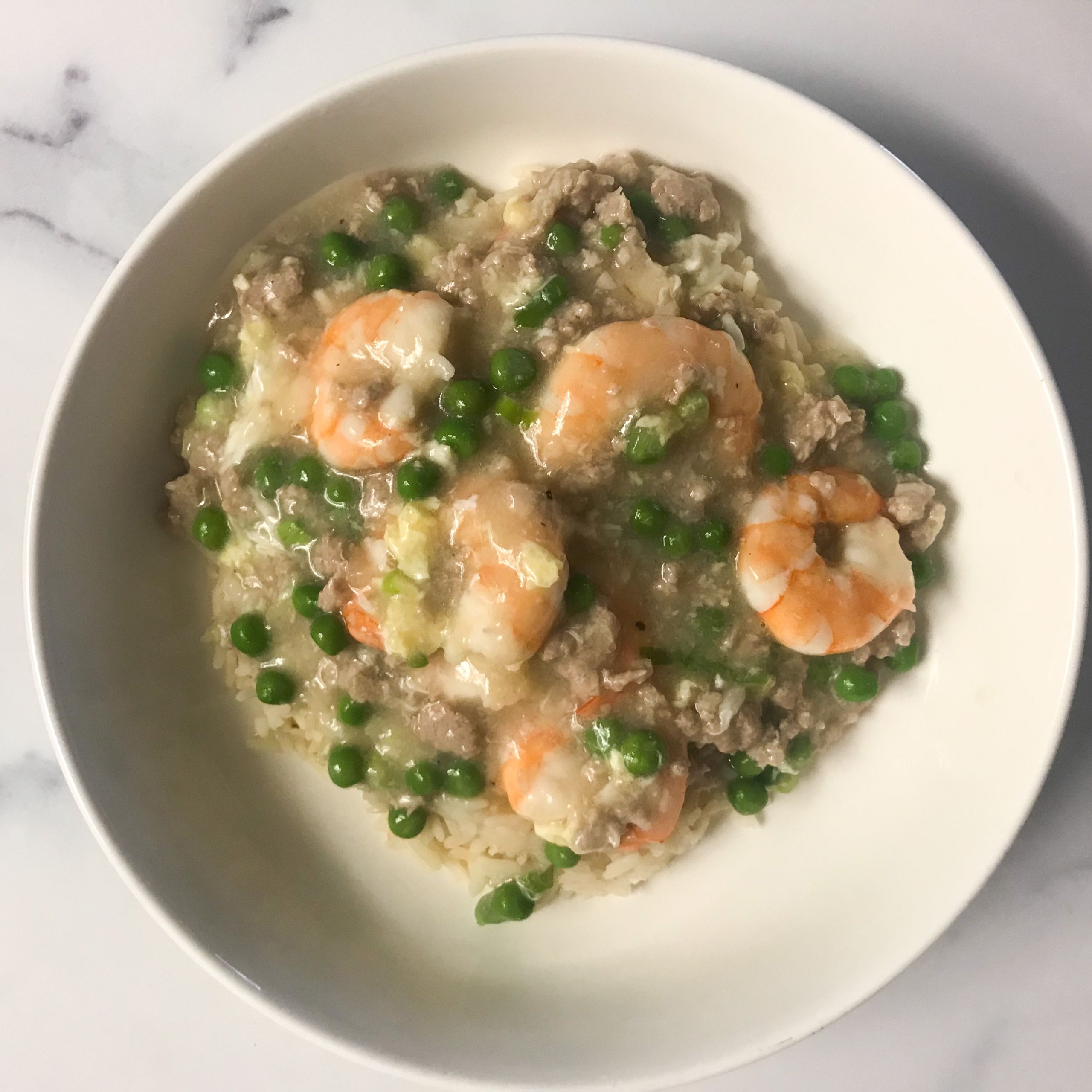 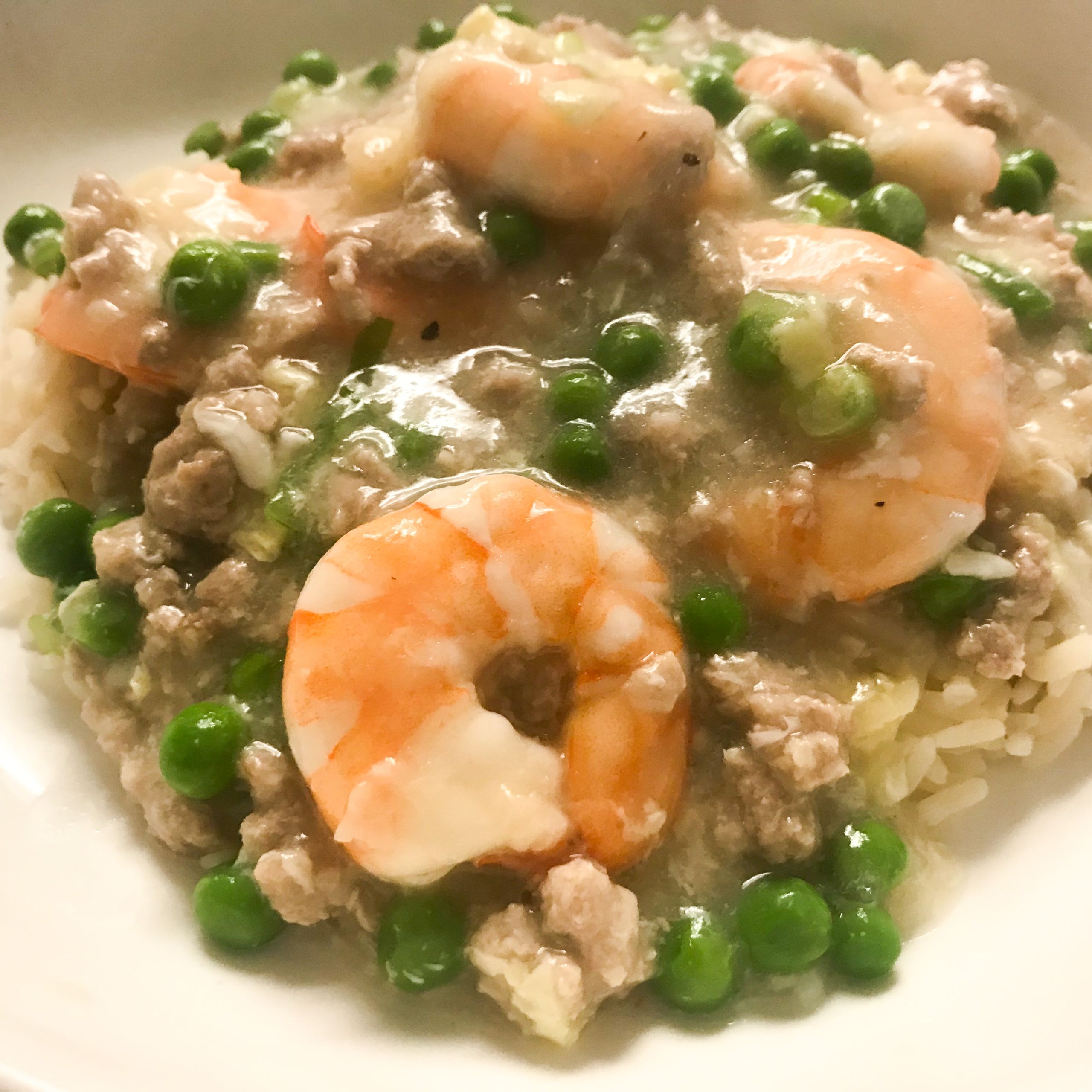 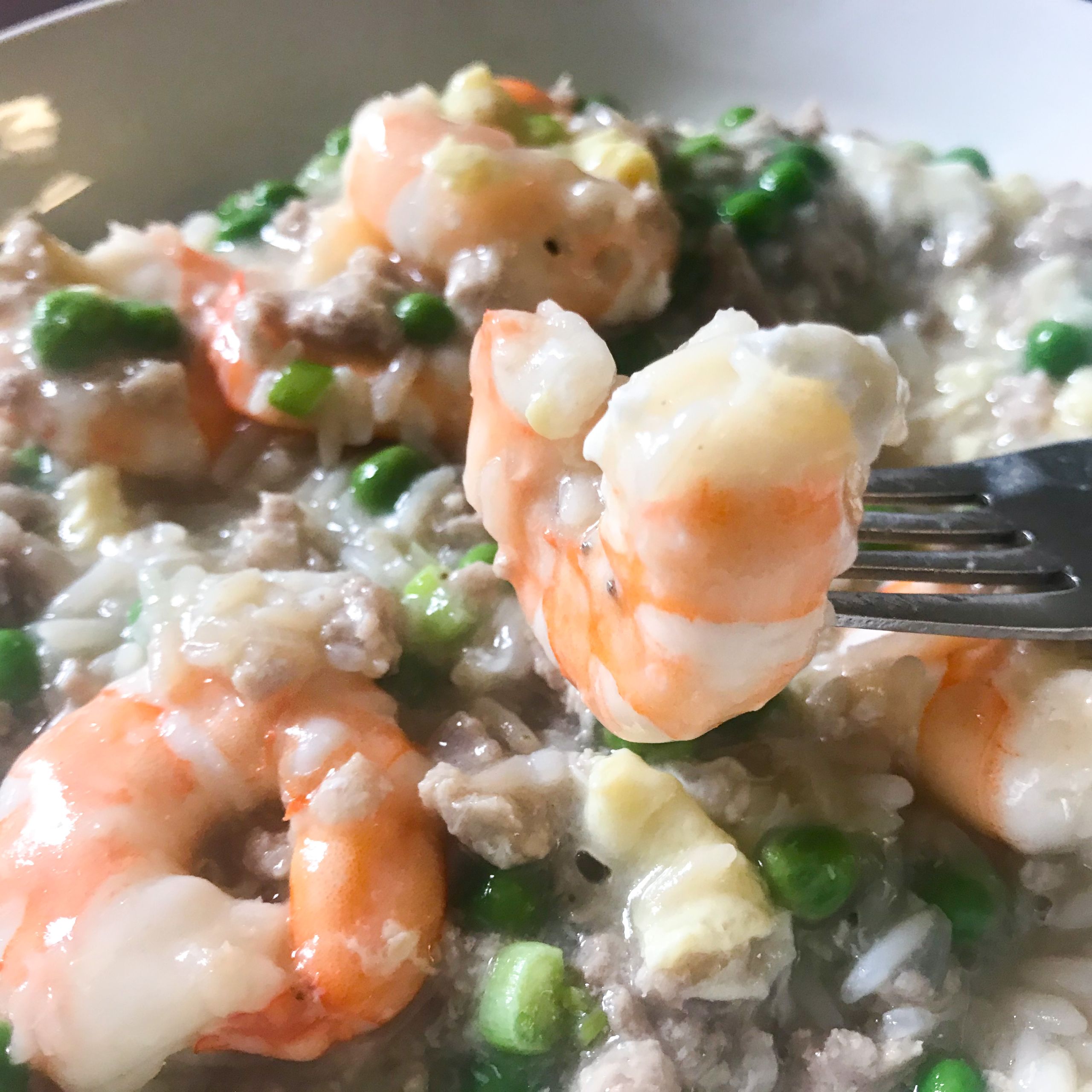 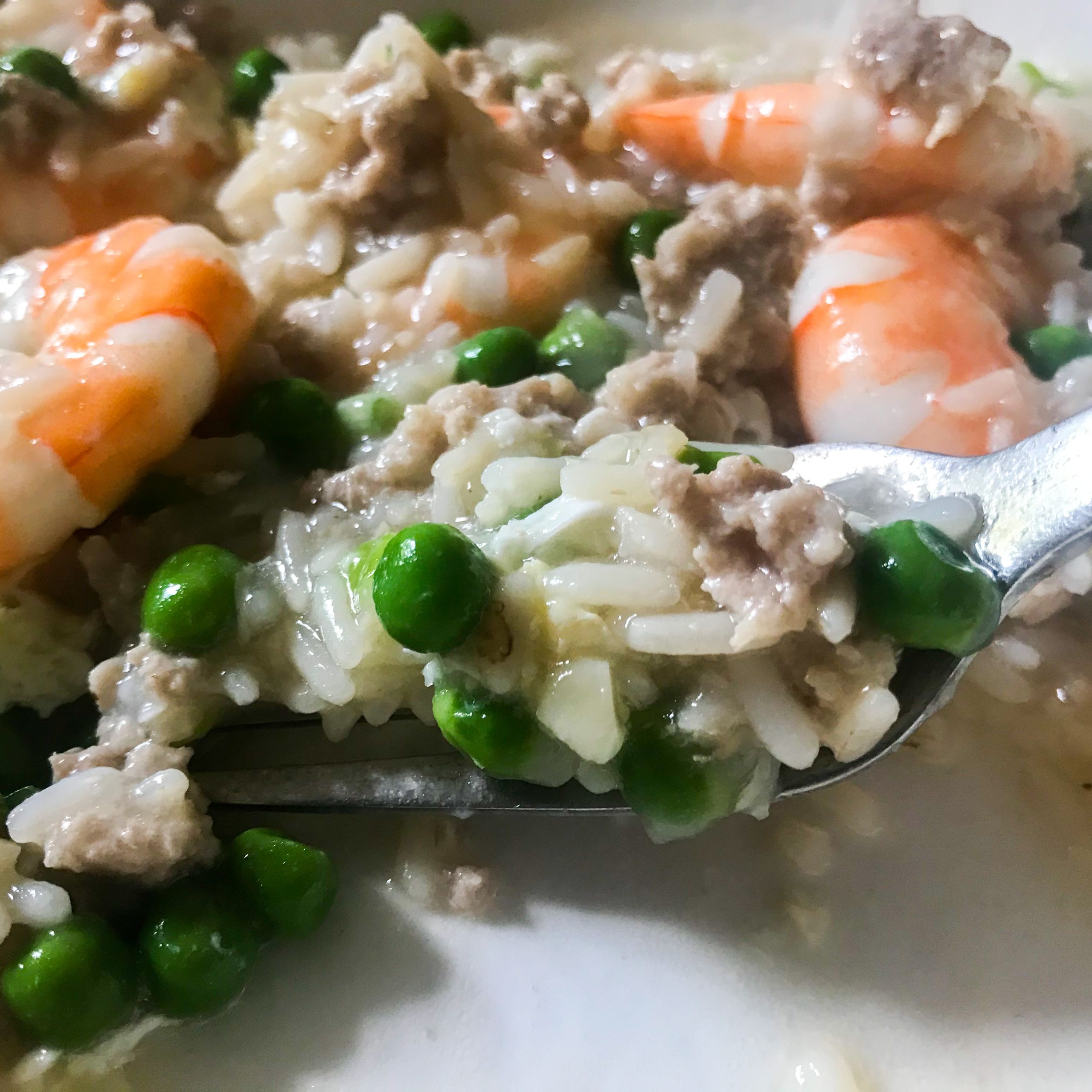